He was a friend of Zeon Zum Deikun and adopted Artesia Som Deikun and Casval Rem Deikun after they and Jimba Ral escaped from Side 3 on an Ocean Cargo ship and settled in Mass's household in Andalusia, Spain.

Mass gave them new names as Sayla Mass and Édouard Mass, and treated them as his own children. The Mass household was assaulted by commandos sent by the Zabi family in response to Jimba's attempt to work with Anaheim Electronics to plan an armed counteroffensive against the Zabis[1], which ended with the death of Jimba Ral and Teabolo having been seriously injured in the attack. Shu Yashima and Mirai Yashima visit. Shu recommends him to immigrate to Side 5's Texas Colony as a gesture to the Zabi family to show that the late Zeon Zum Deikun's children were harmless [2].

During the Battle of Loum, riots occurred in the Texas Colony. The Mass household was attacked by rioters because they were friends with the Aznables, who had been accused of sympathizing with Zeon. Despite the efforts of Sayla to defend her home from the rioters, Teabalo Mass died of shock [3] 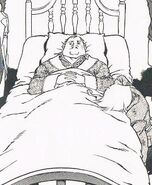 Teabolo Mass passes away.
Add a photo to this gallery

Retrieved from "https://gundam.fandom.com/wiki/Teabolo_Mass?oldid=483463"
Community content is available under CC-BY-SA unless otherwise noted.