Task Force Alpha, the 110th Combat Company is an Earth Federation Forces expeditionary force sent to deal with the uprising led by the New Desides rebels at the asteroid base Pezun in U.C. 0088. The team is composed of Federal Forces, AEUG and Karaba veterans. Their story is told in the Gundam Sentinel photo-novel. 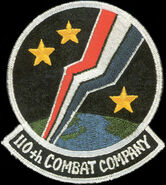