hey all, i was just wondering whether or not the beam cannon actually existed on the hi nu. there is no data on it in teh article, and the data files do not mention anyting about it either. is it just a misrepresentation of the hyper launcher? im removing it from the article jsut in case, but feel free to correct me if im wrong (with proof). The Commander That is Brave... =.=; 14:17, May 14, 2011 (UTC)

Someone must have assumed that the Hi-Nu had the same exact weapons as the Nu, same as with the Nightingale supposedly having a beam tomahawk and missiles (although the SRW games show it only having a rifle, sub-arm sabers and funnels). --Zeikfried, MS Survey Service 14:33, May 14, 2011 (UTC)

My apologies, I was thinking from the reference point of the original Hi Nu design. The 2007 version and the original also have a slightly different weapon loadout, notably the beam cannon being discussed here. I must also retract my statement about the armarments not having been completely listed. In MS Illustrated 2009, the beam cannon is clearly listed under the Hi Nu profile as are the 4 missiles. http://www.flickr.com/photos/teohyc/4170410807/sizes/o/in/photostream/Xavier Lim (talk) 07:08, October 11, 2012 (UTC)

The Hi-Nu is not a completed Nu Gundam. It is extremely misleading to state that when it serves the same purpose as the Wing Zero and Wing Zero Custom as being a protagonist Gundam.

Well, I was not sure of it when I put it, but if I remember well, the novel has the two Nu (namely the Nu Double Fin Funnel Type AND the Hi-Nu). So I decided to put the "completed Nu Gundam" thing. I must check that before, I admit it. I am going to revert back for now.

Could someone please translate all the stuff they say about the MS itself and all of the parts & weapons ? There are maybe some informations we don't have in this article...

1) From looking at the pictures I got confused on its two primary colors. Is it White and Violet or Whie and Blue?

Would appreciate it if anyone could answer these three questions for me cause not really knowing which is the official version has been bugging me for some while.V2gundamDestroyer 03:46, January 11, 2012 (UTC)

1) Both colors are official.

2) Both variants are official.

The Hi Nu comes in 3 flavors, the original illustration with the violet color scheme, the same but with blue instead of violet, and finally the design Izubuchi rolled out for the MG release, which has orange-yellow eyes.Xavier Lim 05:43, January 11, 2012 (UTC)

How about Hi-v evolve. Is it official? The design looks distinctly different even without having to pay close attention. And which insignia between these two is the canonical one? 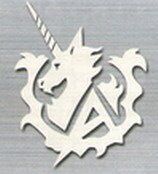 Yes they are both official. Anything that involves Sunrise is considered official. By extension any product Bandai produces is also official since they must request from Sunrise licensing.Xavier Lim 16:16, January 12, 2012 (UTC)

This isn't a model kit or toy wiki and information pertaining to whether or not a model kit comes with a stand or effect parts is thus unnecessary.

Fin funnels the difference between regular and Hi

in my opinon the mager diffrence between the Hi-nu and the NU is the funnels. as both were rushed i feel that in Universe the frame was completed well the fin funnels were not complete as the Hi- Nu's funnels run out of power were the Nu-gundam's have built in generators and therefore could last until they were destroyed.--Guyver92 (talk) 11:56, April 3, 2015 (UTC)