Talia Gladys is captain of the newly commissioned Minerva. She has shown good instinctive battle tactics and often orders the support ZAKU units to stay close to the ship, limiting the amount of damage done to the ship. However her strategic prowess is somewhat lacking, sometimes relying on others to organize battle plans. Captain Gladys does not use the resources of the Minerva recklessly or without provocation. She has been seen to use the Minerva's "Tannhäuser" positron beam cannon normally as a last resort. Her strengths eventually earn her an appointment into FAITH.

While a good tactician, she sometimes has a hard time asserting her authority with some of her mobile suit pilots. This is made worse when two of them are also appointed into FAITH. Even though her crew is loyal to her, Gladys's own loyalties sometimes seem to waver. She clearly disagrees with many decisions handed down to her by the top brass in ZAFT and the PLANT Supreme Council, but despite personal misgivings, she always follows her orders. Her inability to do what sometimes she believes is right makes her vulnerable to manipulation.

In fact, this loyalty (possibly due to a previous relationship with Gilbert Durandal) is one of the greatest differences between Talia Gladys and her closest contemporary, Murrue Ramius. While Ramius, who serves as captain of the ship Archangel in Gundam SEED, takes her ship and its crew and deserts the Earth Alliance when their superiors plan to sacrifice them in battle; Gladys and the Minerva (save for Athrun Zala and Meyrin Hawke) remain loyal to ZAFT throughout the whole series even when she knows Durandal has made morally questionable choices.

When ZAFT was ordered to destroy the Archangel, believing they have only caused confusion during the war, Talia tried to convince them to surrender peacefully. However, Ramius politely refused. Apparently, Talia had her suspicions about who was commanding that ship.

At the end of the series she decides to die with Durandal and Rey in the space fortress Messiah. Gladys also has a son; as her last request, she asks Kira Yamato and Athrun Zala to tell Murrue Ramius that she wishes her to meet him some day.

Talia Gladys was Gilbert Durandal's lover prior to the events of Gundam SEED Destiny, when he wasn't the Chairman of the PLANTs. However, she chose to break this relationship for unclear reasons; it is implied however she wanted a child, which was stated to be unlikely for most Coordinators, who have very low fertility. For this reason, the PLANTs arranged marriage between people able to have children together. 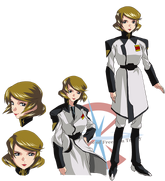 Retrieved from "https://gundam.fandom.com/wiki/Talia_Gladys?oldid=433816"
Community content is available under CC-BY-SA unless otherwise noted.