Day of the Unicorn

When a battle between Londo Bell and the Neo Zeon remnant (aka the Sleeves) raged around the colony Industrial 7, Takuya was witness to most of his classmates being killed in the crossfire. Banagher left to rescue someone, leaving Takuya to defend Micott Bartsch. As they fled, they encountered a blonde-haired girl calling herself Audrey Burne. The trio nearly got killed when debris from a Loto nearly crushed them, had not it been for the timely intervention of Riddhe Marcenas in his ReZEL. Riddhe rescued Takuya and his friends, bringing them aboard a shuttle to the Nahel Argama. While in transit, they noticed a single-horned mobile suit transform into a Gundam. Takuya explained to an ignorant Micott that Gundam is the name of the first mobile suit developed by the Federation; Zeon use to call it the White Devil.

Once aboard the Nahel Argama, Takuya enthusiastically cut in to Riddhe's invitation to Audrey to take a peek at the Gundam. Takuya was very excited, exclaiming that it must be destiny that the new Gundam is held aboard the Nahel Argama, the mothership of the Gundam team during the First Neo Zeon War. When they reach an observation platform, they have a good look. When the technicians finally got the hatch open, the pilot of the Gundam was revealed to be none other than Banagher, much to Takuya and everyone else's shock. Takuya and Micott went to Banagher's side as he was recovering in the med bay. When he regained consciousness, Commander Daguza Mackle of ECOAS entered to interrogate Banagher. Though everyone protested that he was hurt, Mackle could only see a civilian minor who hijacked a military mobile suit and interfered in a combat situation, charges severe enough to warrant capital punishment.

While Takuya and Micott adjourned to their guest quarters, the ship came under attack. Ensign Mihiro Oiwakken rushed into the room, urging them to put on normal suits, before noticing that Audrey was absent. As soon as they got suited up, they watched the monitors as it is revealed that Audrey is actually the Zeon Princess Mineva Lao Zabi.

Following Banagher's capture, the Federation ordered the Nahel Argama to rescue him and the Unicorn Gundam from the Sleeves' sympathetic colony of Palau. While the ship was being repaired and resupplied, Takuya took interest in the new complement of MS being transported.

Once Banagher and the Unicorn were extracted, the Nahel Argama pulled off from Palau. After Banagher was inspected by Dr. Hasan, he returned to his friends, who tell him that no one has noticed that Riddhe had taken Mineva to Earth.

Sadly, Banagher was taken from his friends' company once again as he piloted the Unicorn into the ruins of Laplace station in hopes of finding Laplace's Box. Unfortunately, the ship once again comes under attack the Sleeves. The Nahel Argama was soon helpless to assist Banagher as the Unicorn fell into the atmosphere.

Being held up in the atmosphere for near twenty days, the Nahel Argama soon got ordered from Bright Noa to assist the Garencieres, a Sleeves freighter that had both Banagher and Mineva. Takuya helped at the tether station as the ship fired a tether cable to pull the Garencieres into space. Banagher/Unicorn caught the cable but the shear stress threatened to tear the Gundam apart. Suddenly, it started to spread a green psycofield that enveloped both ships, allowing the Garencieres to achieve orbit.

But their troubles were not over, for the Nahel Argama and the Garencieres came under attack by the General Revil.

Takuya and Micott Bartsch as part of the Nahel Argama crew 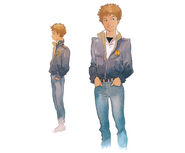 In Mobile Suit Gundam Narrative
Add a photo to this gallery
Retrieved from "https://gundam.fandom.com/wiki/Takuya_Irei?oldid=483457"
Community content is available under CC-BY-SA unless otherwise noted.