Ace Pilot of the Federation forces who was the trump card in the battle to capture Solomon. He was a space fighter pilot from Side 7 but switched to a mobile suit with the formation of MS corps. Following the loss of his family during the Zeon attack on Side 7, he began his amazing career as an MS pilot. He particularly excels at both short & long-range combat and thanks to his aptitude & skill, he was chosen as the pilot of the FA-78-1 Full Armor Gundam. 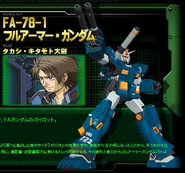 Retrieved from "https://gundam.fandom.com/wiki/Takashi_Kitamoto?oldid=460826"
Community content is available under CC-BY-SA unless otherwise noted.