Tachi was a Zeon officer that assisted Crowley Hamon in her plans to attack White Base and avenge the death of Ramba Ral. During their attack, Tachi piloted the squad's last remaining Zaku, while Hamon led a series of HT-01B Magella Attack Tops located on top of a Gallop hovercraft. During the battle, Tachi manages to jump aboard White Base and attack it with his Zaku, but Hamon calls him back to attack the RX-78-2 Gundam when he attempts to stop the explosive-laden Gallop from hitting White Base. Tachi attacks the Gundam in his Zaku, but Amuro manages to flip it above him, directly into the blast of one of the Zeon's Magella Tops, resulting in Tachi's death. 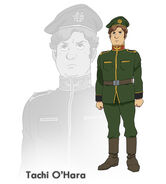 Add a photo to this gallery
Retrieved from "https://gundam.fandom.com/wiki/Tachi_O%27Hara?oldid=414141"
Community content is available under CC-BY-SA unless otherwise noted.