The TS-MB1B Euclid is a Mobile Armor introduced in the anime Gundam SEED Destiny.

The Euclid is a mass-production unit used by the Earth Alliance and the latest entry in their TS series of mobile armors. Using technology derived from the YMAF-X6BD Zamza-Zah, the Euclid is larger and more powerful then the TS-MA2 Moebius. The Euclid possesses extremely powerful thrusters that allow it to be highly mobile and fly at high speed both in space and on Earth, unlike Moebius which can only be used in space. For offense, it is armed with two beam cannons and two Gatling guns. For defense, it is equipped with a positron reflector shield like the Zamza-Zah.

The positron reflector shield is a powerful energy shield that is strong enough to deflect a positron cannon blast. This shield is jointly generated by the two emitters mounted in the sides of the MA. These two emitters are covered when not in use.

Mounted at the sides of the main body, above the Gatling Machine Guns, the pair of high energy beam cannons are the MA's main weapon and are strong enough to destroy any MS and warships in their firing path.

Mounted in the lower half of the MA, below the beam cannons, the pair of Gatling machine guns have high rate of fire and high destructive power. Not only are they capable of shooting down enemy missiles, they are also powerful enough to destroy MS with a concentrated stream of fire.

The Euclid debuted during the Second Alliance-PLANT War in the Battle of Heaven's Base, when several dozen units were among the forces fielded to defend against ZAFT's attack on the base.

Later, Euclids were fielded in space to defend the relay stations of the super weapon "Requiem", as well as the "Requiem" cannon itself.

Rising out of hangar 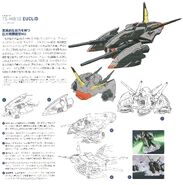