The TS-MA4F Exus (aka Exass) is a Mobile Armor featured in the anime Mobile Suit Gundam SEED Destiny.

Based upon the TS-MA2mod.00 Moebius Zero and incorporating data from the AQM/E-X04 Gunbarrel Striker, the Exus features vastly improved weaponry and performance, that put it on par with the ZAFT's new ZAKU series of mobile suit. The mobile armor is armed with a 38.5mm machine gun, a quadruple missile launcher, two linear guns, and four wire-guided gunbarrel pods. The gunbarrel pods are remotely controlled by the pilot, and are the unit's most powerful weapon as they allow it to engage multiple enemy units at once. Each gunbarrel features two beam guns and two beam cutters, thus they can be used in ranged and melee combat, something that the gunbarrels of the earlier Moebius Zero and Gunbarrel Striker cannot do. Like the Moebius Zero, the Exus is usable only in space.

A small rapid-firing ballistic weapon located on the body of the Exus. Mainly used for shooting down missiles and weakly armored enemies.

A missile pod stored in the body of the Exus, it pops up from the top surface during use. The small missiles it fires are mainly used for restricting enemy movements.

A pair of linear guns mounted underneath the body of the Exus that utilized electromagnetic forces to rapidly accelerate projectiles. The linear guns can swivel up and down, and rotate left or right as they are mounted on a movable turret.

A wired remote controlled weaponry, the Exus is equipped with four of them, allowing it to fight multiple enemies at once or provide barrages and multi-directional flanking. Like the Moebius Zero's gunbarrels, these gunbarrels can only be controlled by pilots with high spatial awareness.

A pair of beam guns are mounted on each Gunbarrel, giving it the firepower to easily damage and destroy even Phase-Shift armored units.

Each Gunbarrel also has a pair of beam blades, granting it close combat capabilities.

The successor of Moebius Zero, the Exus was developed after the Junius Treaty was signed. One Exus was piloted by Neo Roanoke, commander of the Earth Alliance's 81st Independent Mobile Battalion (A.K.A Phantom Pain), an elite force sent to steal the three new Gundam prototypes developed by ZAFT. During the theft, Neo went out in this mobile armor to buy more time for his team members to escape from Armory One and destroyed several enemy units guarding the colony.

When the new ZAFT battleship Minerva engaged the Phantom Pain forces in the Debris Belt, Neo again launched in his mobile armor and fought against Rey Za Burrel in his ZAKU Phantom. When Phantom Pain descended to Earth, Neo switched to a custom colored Windam.

Another such unit was piloted by Morgan Chevalier, who used his Exus to guard a shuttle containing Bernadette Leroux and Edward Harrelson. Both were considered criminals and were been sent to an Alliance base on Earth. However, the shuttle was attacked by the Proto-Savior, piloted by Ile De Llorar. Morgan used his Exus to fight against it, but Llorar was able to destroy all of the gunbarrels of Morgan's unit. The battle ended when Llorar was driven away by Jean Carry. 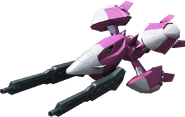