Designed prior to the First Alliance-PLANT War, the Moebius Zero was a space combat-use mobile armor developed by the Earth Alliance. In addition to a linear gun, the Moebius Zero is armed with four wired gunbarrels that served as the mobile armor's main weapons. Each wired gunbarrel is armed with two autocannons and can detach from the Moebius Zero to perform all-range attacks. When attached to the main body, these gunbarrels also served as additional thrusters, increasing the speed and maneuverability of the mobile armor. However, the gunbarrels required high spatial awareness to use effectively, an ability few pilots had. As a result, only a small number of Moebius Zero was produced, and it later became the prototype for the mass produced TS-MA2 Moebius. Despite this, the Moebius Zero was the only machine the Earth Alliance had during the early stages of the war that could stand toe-to-toe with ZAFT's mobile suits, such as the ZGMF-1017 GINN.

Mounted underneath the Moebius Zero's main body, this is the same linear gun as used by the TS-MA2 Moebius. Although weaker than beam weaponry, it is powerful enough to destroy an enemy mobile suit or blast through a warship's hull armor.

The Moebius Zero is equipped with four wired gunbarrels, each equipped with two autocannons. They are usually mounted on the mobile armor's main body, but can be detached and controlled through wires to attack an enemy from multiple directions, or for attacking multiple enemy units at once. Although the wired gunbarrels' autocannons can only deal relatively light damage to a mobile suit, they still allow the Moebius Zero to hold the enemy machine in place and finish it with the more powerful linear gun. Also, the gunbarrels can function as additional boosters when attached to the mobile armor, granting it higher speed and mobility than the Moebius. The only drawback of the gunbarrels is that only pilots with high spatial awareness can use them.

The small number of Moebius Zero units produced and their pilots were assembled into an elite mobile armor unit and assigned to the Alliance's 3rd Space Fleet. During the First Alliance-PLANT War, this elite unit participated in the Battle of Endymion Crater on June 2, C.E.70 and one of its members, Lieutenant Mu La Flaga, earned the nickname "Hawk of Endymion" for destroying five ZGMF-1017 GINNs. This battle was also where Mu first fought against Rau Le Creuset, who piloted a ZGMF-1017M GINN High Maneuver Type then. However, the battle ended with the entire 3rd Fleet destroyed, with Mu being the only survivor of the elite mobile armor unit.[1]

On January 25, C.E. 71, Mu used his Moebius Zero during the Battle of Heliopolis, where he once again battled his rival Rau Le Creuset, who was now piloting a ZGMF-515 CGUE. Just before Mu's Moebius Zero could be destroyed, Rau's CGUE was damaged by the GAT-X105+AQM/E-X03 Launcher Strike and forced to retreat.[2] Mu then joined the crew of the Archangel, and his Moebius Zero was repaired by the ship's mechanics. Afterwards, Mu used his mobile armor to heavily damage Rau's ship, the Nazca-class destroyer Vesalius, in a sneak attack during the Skirmish near Artemis.[3]

At some point during the war, the Moebius Zero served as the basis for the development of two new mobile armors: the AQM/E-X04 Gunbarrel Striker, which could double as a striker pack for the Strike Gundam and the GAT-01A1 Dagger, and the TSX-MA717/ZD Pergrande, a large machine equipped with wireless remote weaponry and jointly operated by three pilots. After the end of the war, the Alliance developed another new mobile armor based on both the Moebius Zero and the Gunbarrel Striker, the TS-MA4F Exus.[8] 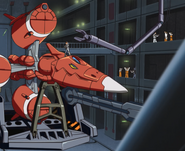 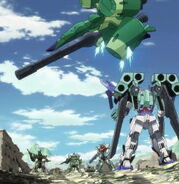 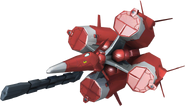 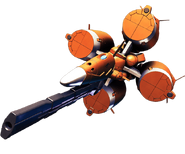