The TS-MA2 Moebius is a Mobile Armor introduced in the anime Mobile Suit Gundam SEED.

However, when the First Alliance-PLANT War broke out, the Moebius was hopelessly outperformed by ZAFT's mobile suits, such as the ZGMF-1017 GINN, with the average kill ratio of the Moebius against a GINN stated to be between three-to-one and five-to-one. Despite this, the Moebius still proved useful in a support role, utilizing its speed for "hit-and-run" attacks, as demonstrated by the Ortygia squad.[1] The Moebius was eventually phased out of the frontlines, replaced by the GAT-01 Strike Dagger, but near the end of the war, the mobile armor was deployed in large numbers as nuclear missiles delivery platforms, showing that it can still be useful in certain situations.

Mounted directly beneath the unit's main body, the linear gun fires electromagnetically accelerated physical projectile and usually serves as the main weapon. This linear gun is based off the model used on the TS-MA2mod.00 Moebius Zero and can damage a mobile suit's armor or a warship's armor. However, the weapon's limited rate of fire and the Moebius's poor mobility when compared to a mobile suit negates much of its power. This linear gun can be switched with other weapons depending on the mission's needs.

Slung underneath the section between the main body and the engine pods, the Moebius is often outfitted with four missiles, two on each side. When the missiles are launched, they are first dropped before the missiles' on board computer activates the missiles' thrusters. The missiles are typically launched two at a time, and can be switched for other weapons depending on the mission's needs.

The Moebius has a pair of built-in 40mm vulcan guns as its only fixed armament. The vulcan guns are small caliber armament that is useful for restricting the movement of enemy units and intercepting enemy's attacks, but are enough to damage a GINN's armor with repeated hits.

Gai Murakumo's Moebius uses a Gatling gun in place of a Linear Gun, giving it a high rate of fire.

Mounted under the unit's body, it is an experimental beam weaponry and to make it work with the Moebius, the cannon is equipped with its own power unit. Although the beam cannon virtually doubles the Moebius's mass, it does gives the mobile armor better firepower.

Created before the First Alliance-PLANT War, the Moebius was initially a swift and powerful weapon, but it became obsolete when the ZGMF-1017 GINN was introduced by ZAFT. Until the introduction of Natural-pilotable mobile suits, the Moebius was the backbone of the Earth Alliance forces, despite its inferior performance against enemy mobile suits. Nevertheless, it was a single Moebius unit which fired the nuclear missile that destroyed the PLANT colony Junius Seven, triggering full scale war between the two forces.[2]

The Moebius was removed from frontline use by late June, CE 71, replaced by the GAT-01 Strike Dagger.[3] Nevertheless, in September, several squadrons were launched from the Earth Alliance's Agamemnon-class carriers as nuclear missiles delivery platforms during the Battle of Boaz and the Second Battle of Jachin Due. Most of these Moebius units were destroyed, along with the majority of the Strike Daggers.

After the war, the Alliance fully replaced the Moebius with mobile suits, and by late C.E. 73, the Moebius' role as a nuclear missile platform had been taken by the GAT-04 Windam, which could be equipped with a Multi Striker carrying twice as many missiles and still be effective in combat. Despite the introduction of mobile suits, many within the Alliance sought to resurrect the mobile armor as their frontline weapon and during the Second Alliance-PLANT War, the Alliance deployed a new series of mobile armors developed by the Adukurf Mechano-Industries, including the successor of the Moebius, the TS-MB1B Euclid.[4]

Equipped with linear gun and missiles 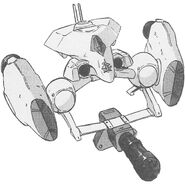 During the Second Battle of Jachin Due 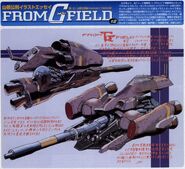