The TMF/T BuCUE Tank is a custom mobile suit appearing in the Gundam Build Fighters anime series. Based on the TMF/A-802 BuCUE, the Gunpla is operated by Mario Renato and controlled by Julio Renato.

A Gunpla that the Renato brothers created for the Gunpla Race, it is a modified BuCUE in which its rear legs are replace by new parts that consist of large tank treads and thrusters. This grants it excellent mobility even on bad roads. The BuCUE Tank normally moves using only the large treads, but can also use the treads on the forelegs and the thrusters when additional speed is needed. It is equipped with a missile pod and a pair of beam guns that can also function as beam sabers.

Located on the articulated mount units above the forelegs, the beam guns can also emits beam sabers from their tips.

Mounted on the original BuCUE's weapon turret, it can fire a barrage of missiles to keep opponents back.

The BuCUE tank is the third Gunpla seen to be used by the Renato brothers. It contended in the World Tournament's Preliminary Race, where it competed against Sei Iori and Reiji with their newly repaired GAT-X105B/ST Star Build Strike Gundam. It kept a steady second place during the beginning of the race, taking the lead after the Star Build Strike was ensnared into the Hell Zeong Marine's trap. Towards the ending of the race, the BuCUE Tank raced head on with the Star Build Strike, as they went neck and neck. With its arsenal of missiles it was able to keep its opponent back just long enough so that the Star Build Strike's Plavsky Particle surplus would drain before it could take the lead, and the Renato brothers were victorious after deploying a second mode with the BuCUE, giving it a huge speed boost to the finish line. 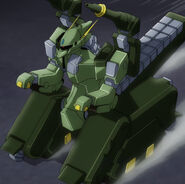 Retrieved from "https://gundam.fandom.com/wiki/TMF/T_BuCUE_Tank?oldid=490293"
Community content is available under CC-BY-SA unless otherwise noted.