The GINN OCHER Type is a Mobile Suit in the series SEED-MSV.

A variant of the ZGMF-1017 GINN, the GINN OCHER (Operation Commando Hard Environment Reinforced) Type was created for use in desert environment. As such, it is fitted with dustproof filters for its air intakes, flexible sleeves on its joints and folding plates on its feet for extra stability on the ground. The original GINN's space-use equipment and systems (such as the thrusters and cooling systems) have been removed, and are replaced by extra batteries and gas turbine generators in the backpack to extend the suit's operating time.

The suit also has improved sensor array in its head fin, smoke dispensers mounted on the right shoulder, and special equipment in the form of a tight-beam ultrasonic scanner and a pulse compression subsurface radar, granting it enhanced scanning abilities. Like the GINN, the GINN OCHER Type has no built-in weaponry, it can be armed with an experimental 37.5mm hyper-velocity rifle, heavy assault machine gun or a 500mm recoilless rifle, and can use a heavy blade or heavy axe for close combat. Following the introduction of the TMF/A-802 BuCUE, the GINN OCHER Type is mainly deployed to provide tactical support.

The MMI-M8A3 76mm heavy assault machine gun is the standard ranged armament of the GINN series of mobile suits and has two firing modes, semi-auto and full-auto. It is magazine-fed and the GINN is capable of carrying extra magazines in case the first one runs out of ammunition. Because of its versatility and power, the MMI-M8A3 is the pilot's weapon of choice on almost any mission with the exception of anti-fortress combat. When not in use, the MMI-M8A3 is stored on a weapons mount on the back of the waist.

The M68 "Cattus" 500mm recoilless rifle is a standard GINN armament that is similar in design to a bazooka, and can fire various types of rounds depending on the magazine used. It has greater range and firepower than the MMI-M8A3 76mm heavy assault machine gun, but has less ammunition and a slower rate of fire. Like the machine gun, it is a frequently used weapon.

Equipped with a folding stock and spiral magazine that facilitates precision shooting.

The MA-M3 heavy blade is a sword and the standard close range armament of the GINN series of mobile suits. It is manufactured using molecular processing technology and has an appearance similar to an European broadsword, featuring a double-edged blade. The design of the blade relies on both its weight and the force of the attack to crush armor as much as it relies on its keenness to cut.

Three smoke dispensers are mounted on the right shoulder, they are capable of releasing smoke to cover the area around the suit.

During the First Alliance-PLANT War, ZAFT created several variants of its standard ZGMF-1017 GINN to fulfill different purposes. One such variant is the GINN OCHER Type, which was designed to be used in harsh desert environment. One person who used this suit was ZAFT commander Andrew Waltfeld, the commander of the ZAFT-controlled territory in Africa. The GINN OCHER Type was used alongside the TMF/A-802 BuCUEs and TFA-2 ZuOOTs for defending areas, patrolling, etc. The GINN OCHER Type remained in service even in CE 73, and one operation where they took part in was Operation Lohengrin Breakthrough. 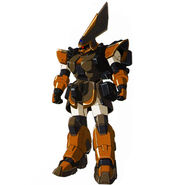 Standing on a Petrie-class ship

Retrieved from "https://gundam.fandom.com/wiki/TMF/S-3_GINN_OCHER_Type?oldid=464911"
Community content is available under CC-BY-SA unless otherwise noted.