The TMF/A-803 LaGOWE is a mobile suit introduced in the anime Mobile Suit Gundam SEED.

In C.E. 71, ZAFT learned that the OMNI Enforcer possessed mobile suits of its own following the Battle of Heliopolis. In response, they began modifying the existing TMF/A-802 BuCUE for anti-mobile suit combat while simultaneously developing a high-performance successor unit. The result was the TMF/A-803 LaGOWE, which was developed based on the TMF/A-802 P-Mod.W BuCUE Waltfeld Custom Type.[1][2][3]

The LaGOWE maintained the BuCUE's ability to transform between a quadrupedal mode and a cruising mode, but unlike the BuCUE, the LaGOWE was designed with close combat and anti-mobile suit combat in mind. It is equipped with a enlarged head-mounted sensor array that allows better intelligence gathering, a twin beam saber in its "mouth", and claws that can function as melee weapons. Its back turret weapon was also changed to a twin beam cannon. Both the twin beam saber and twin beam cannon were developed using data from the OMNI Enforcer's mobile suits that were captured by ZAFT in Heliopolis. [1]

In order to compensate for the increase in weight and size, the LaGOWE was fitted with improved leg units and have more thrusters in its wings. Like the BuCUE Waltfeld Custom Type, the LaGOWE adopted a two-seater design, with a gunner seated in the front and a pilot seated in the back. With this arrangement, the gunner can make the most effective use of the mobile suit's beam weaponry, while the pilot can better concentrate on piloting, allowing the LaGOWE to be utilized at its maximum potential and demonstrating mobility that far surpasses that of BuCUE's.[1][4]

A close combat beam weapon mounted in the head. It was later adopted by the late production version of the BuCUE. The LaGOWE's twin beam saber has a slightly different design from the BuCUE's, featuring better output and stability.[1] They would eventually serve as the basis for the MA-M01 "Lacerta" beam saber used by the ZGMF-X10A Freedom Gundam and the ZGMF-X09A Justice Gundam.[5]

The second close combat weaponry on the suit are claws mounted on each leg that are sharp enough to penetrate normal armor. The claws serve to increase the suit's close combat capabilities.

A twin barreled beam cannon mounted on the back turret, it served as the LaGOWE's main weapon. It has a high output since it is powered by the large generator in the main body. A dedicated gunner operates this weapon to maximize its capabilities.

The first LaGOWE was assigned to "Desert Tiger" Andrew Waltfeld, whose lover Aisha served as his gunner. It fought against the GAT-X105+AQM/E-X01 Aile Strike Gundam during the Battle of Talbadiya. The two machines fought to a stalemate, inflicting heavy damage on each other. The LaGOWE was finally defeated when the Strike impaled it in the back with its "Armor Schneider" Combat Knife, destroying the machine.[6] Andrew survived the LaGOWE's destruction, but lost his left arm and eye, while Aisha died in the battle. Later in the war, three LaGOWEs engaged Rena Imelia's GAT/A-01E2 Buster Dagger, which was receiving support from Edward Harrelson's GAT-333 Raider Full Spec. All three LaGOWEs were destroyed by Imelia.

Appearing in the manga, Mobile Suit Gundam SEED Re:, it is an enhanced LaGOWE featuring additional weapons, and improved mobility via the use of the ZGMF-1017M GINN High Maneuver Type's thruster engines in its wings. The additional weapons are in the form of added cannons and beam sabers on the wings, and added beam fangs on the head. An anchor launcher, in the form of an extendable tail, is also added to the unit's back, above the back thruster. 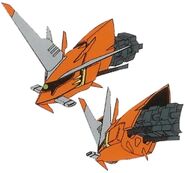 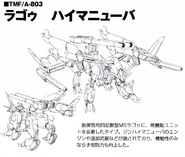 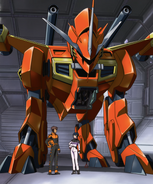 In Lesseps' hangar with Andrew and Aisha (HD Remastered) 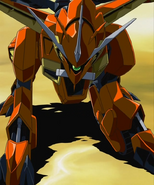 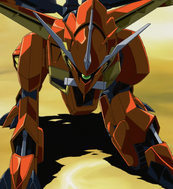 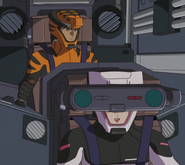 As seen in the ED for Never Ending Tomorrow

As seen in the OP for Never Ending Tomorrow 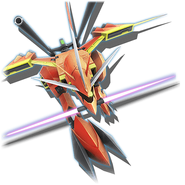 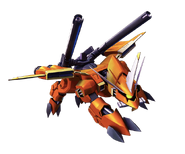 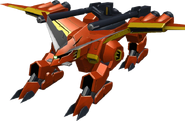 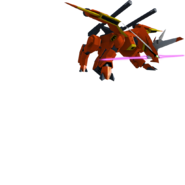