A modified version of the BuCUE used by "Desert Tiger" Andrew Waltfeld, the BuCUE Waltfeld Custom Type is strengthened for close combat with the addition of two head-mounted saber fangs and foreleg-mounted leg spikes. Unlike the normal BuCUE, this unit is equipped with a two-seater cockpit for a pilot and a gunner, who also serves as a navigator. It also has modified power and drive system, and complementing these modifications are changes to the materials used in certain parts of the unit. As a result, its output is improved by 17% and the maximum moving speed, when the treads are not used, is increased by 21%. These give it better maneuverability and close combat capability, but on the flipside, its balance is not as good as BuCUE's and makes controlling the unit difficult.

Besides the saber fangs and leg spikes, the BuCUE Waltfeld Custom Type also mounts the same back-mounted 13-tube missile pod as the normal BuCUE, which could be switched for the twin railgun. Although ZAFT was already studying beam weaponry at this time, this BuCUE variant does not feature any but its modified power system was designed to be capable of supporting beam sabers. Originally, this machine was a new equipment demonstration platform for the the TMF/A-803 LaGOWE‎‎ and not intended for actual combat operations, but Waltfeld forcibly commandeered it as his personal machine due to its high performance.

One of two weapons that can be mounted on the turret on the suit's back, this two barrel railgun use electricity to accelerate the projectiles. The projectiles are fitted with plasma warheads that can destroy a Linear Tank with a single blow. Due to the BuCUE's quadruped design, it is able to fire the railgun steadily, without worry of recoil or kickback.

The other weapon that can be mounted on the turret on the suit's back, since the turret is a rotary type, it can be fired in all directions. A sensor is installed at the tip of the warheads to automatically recognize and track enemy targets.

A pair of spikes mounted on the foot of each forelegs. They increase the close combat capability of the unit.

Two cutters made of a special alloy are equipped on the head. This armament is reminiscent of the saber tiger's fangs, but it was not adopted for the LaGOWE because it posed a major obstacle to its operation and transportation in base facilities and during urban warfare.

This machine was used by Andrew Waltfeld until he received his TMF/A-803 LaGOWE, and was then put into storage at the Gibraltar base. The unit was later used by Serpent Tail's Elijah Kiel and Loretta Aja, upon the request of Martin DaCosta, to save Lowe Guele and his friend from a trap set up by Blue Cosmos terrorists.

Afterward, the unit was acquired by the Junk Guild and the missile pod was replaced with manipulator arms for scavenging work. This version was piloted by Kisato Yamabuki, and stored on the ReHOME. Alongside others, she used the suit in space to assist Lowe Guele and his MBF-P02 Gundam Astray Red Frame in a battle against Rondo Gina Sahaku in his MBF-P01-ReAMATU Gundam Astray Gold Frame Amatsu. Kisato got assistance from the holographic George Glenn, but due to the fact that the BuCUE was poorly outfitted for space use, it was easily defeated, although Kisato was able to cause minor damage to the suit. 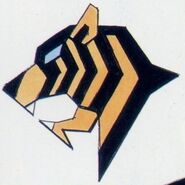 Andrew Waltfeld's custom emblem on the shoulder of the mobile suit.