The TMF/A-802W2 Kerberos BuCUE Hound is a variant of the TMF/A-802 BuCUE introduced in the ONA Mobile Suit Gundam SEED C.E. 73: STARGAZER.

Kerberos BuCUE Hound is the latest variant of the BuCUE. It is created to extend the lifespan of the BuCUE series and to complement the "New Millenium" series of MS. The main modification to the suit is the addition of an attachment to the turret part on the back, allowing it to use the Wizard System of the ZAFT Armed Keeper of Unity. This also improves the suit's versatility, weapon choices and simplifies maintenance and supply of equipment. However, most of the Wizard System's armament packs are designed for humanoid mobile suit, making it difficult for a quadrupled, beast-like mobile suit to use them at their full potential. To solve this issue, the Kerberos Wizard was developed.

A pair of beam cannons located in the "mouth" of each "head" of the Kerberos Wizard. As the Kerberos Wizard is mounted on a rotatable turret, the pair of beam cannons have a wide firing arc. Due to the design of the targeting system on the "heads", the cannons' effective range are shortened but in return, they gain higher firing rate which is useful for restricting the enemy during close combat.

Created after the end of the First Alliance-PLANT War, the Kerberos BuCUE Hound is an upgraded variant of the original BuCUE. The name of this BuCUE variant is derived from the three heads (one on the body and two on the Kerberos Wizard), which is similar to the ones on the mythical Kerberos.

During the Second Alliance-PLANT War, a team of Kerberos BuCUE Hounds was part of a ZAFT strike force which attacked the Earth Alliance's Hannibal-class Bonaparte. Working together, the team took down the GAT-X1022 Blu Duel Gundam, killing its pilot Mudie Holcroft. The team was then destroyed by Sven Cal Bayang in his GAT-X105E+AQM/E-X09S Strike Noir Gundam.

A custom-colored Kerberos BuCUE Hound was used by ZAFT pilot Isaac Mau, who joined the crew of the Mars ship Acidalium. Using the suit, he and the Mars mobile suit pilots of the Acidalium fought several times against the Earth Alliance. The first fight was during a meeting between Mars pilot Ergnes Brahe and the members of Phantom Pain, whose only interest was to get information from Ergnes. Later, Phantom Pain collaborated with the Orb Union to destroy the Mars ship, which resulted in a battle between the Acidalium and a joint Phantom Pain/Orb strike force using GAT-01A2R 105 Slaughter Daggers. In this battle, Isaac was able to cripple two of the Slaughter Daggers which bombarded the ship from afar.

Another custom Kerberos BuCUE Hound belonged to ZAFT pilot Alec Lad, who was assigned to the Republic of East Asia. Besides using the usual Kerberos Wizard, he also used the Blaze Wizard.

Appearing in the manga Mobile Suit Gundam SEED Frame Astrays, it is a Kerberos BuCUE Hound equipped with a Blaze Wizard instead of the Kerberos Wizard. Following the loss of his Kerberos Wizard in the fight against Gai Murakumo's MBF-P03third Gundam Astray Blue Frame Third, Alec Lad outfitted his mobile suit with the Blaze Wizard. Using the Blaze BuCUE Hound, Alec was able to fight with Xist Elwes's custom colored ZGMF-515AS CGUE Assault to a stalemate. 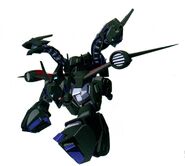 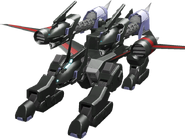 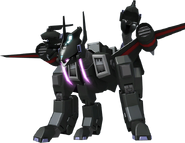