The TK-56 Tekkadan Mobile Worker is a mobile weapon from the second season of the Mobile Suit Gundam IRON-BLOODED ORPHANS television series.

Although the Tekkadan bought many MS from Teiwaz, it still needs mobile workers for use in the streets, etc.[1] So new mobile workers that are larger, has higher performance and better firepower than Tekkadan’s old mobile workers were acquired to expand the team.[1] Its front armor is sloped to protect against projectiles.[1] Primarily used by new members of Tekkadan, it also has no Alaya-Vijnana System, and requires a pilot and gunner to man.[2]

The Mobile Worker's main armament, one is mounted on each side. The gun’s magazine holds 12 rounds each.[1]

A chain gun is mounted on the chin of the mobile workers to deal with infantry.

The machine comes with a pair of 110mm six-tube rocket pods at the back. 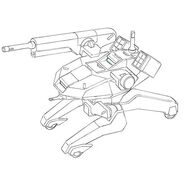 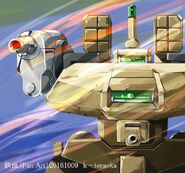 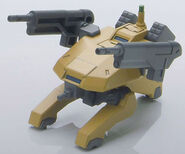