Used for combat duty by Chryse Guard Security and Tekkadan.[2] When not used in combat, its weapons are often removed and equipped with a flatbed to transport people and materials.[2] They are older than the ones available on the market now, and hence has inferior armaments and performance.[3][4] It runs on a Hydrogen Engine[5] and thus can be operated legally within city limits, unlike mobile suits that cannot as their Ahab reactors would ruin various city functions. A commander variant and a space variant also exists. Tekkadan later acquired an upgraded version with better armament.

The CGS Mobile Worker possess two 30mm machine guns mounted on the hardpoints on either sides.[1] While they are able to do damage to other mobile workers, they can barely do any damage to mobile suits due to their Nanolaminate Armor.[3]

The pair of 30mm machine guns can be replaced with a pair of 8-tube missile pods when required.

An organic device system, this old man-machine interface was developed during the Calamity War to maximize the abilities of the mobile suit. However, it can also be use for piloting mobile worker. The system has two parts, one part is installed in the mobile worker, and the other part is implanted into the pilot’s spine. With this system, the pilot can connect to the mobile worker's computer and directly process its data. It also allows the pilot (even uneducated ones) to operate mobile worker without reading the instruction manual. The implant in the pilot also enhances spatial awareness. The drop in technical capabilities after the Calamity War, coupled with the use of an incomplete version of the system in the Outer Sphere areas (such as Mars and Jupiter), lead to the implant surgery having a low success rate and can only be done at a young age to let the implant fuse as the pilot grow.

A pair of 4-tubed smoke dischargers can be attached to the sides of the Mobile Worker. They fire smoke grenades to provide concealment from enemy sight.

Cockpit of the Mobile Worker, with Mikazuki piloting inside. 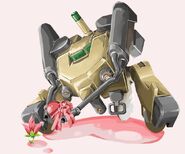