A commander variant of the TK-53 CGS Mobile Worker, besides having a second exposed seat at the rear for the commander, it also has extra sensors. Other than these changes, it is almost identical to the standard type.

The CGS Mobile Worker Commander Type possess two 30mm machine guns mounted on the hardpoints on either sides. While they are able to do damage to other mobile workers, they can barely do any damage to mobile suits due to their Nanolaminate Armor.

An organic device system, this old man-machine interface was developed during the Calamity War to maximize the abilities of the mobile suit. However, it can also be use for piloting mobile worker. The system has two parts, one part is installed in the mobile worker, and the other part is implanted into the pilot’s spine. With this system, the pilot can connect to the mobile worker's computer and directly process its data. It also allows the pilot (even uneducated ones) to operate mobile worker without reading the instruction manual. The implant in the pilot also enhances spatial awareness. The drop in technical capabilities after the Calamity War, coupled with the use of an incomplete version of the system in the Outer Sphere areas (such as Mars and Jupiter), lead to the implant surgery having a low success rate and can only be done at a young age to let the implant fuse as the pilot grow.

Orga Itsuka often observe the battlefield and give orders from the second rear seat of a brown colored CGS Mobile Worker Commander Type. Its pilots were initially Eugene, Biscuit, and then later Takaki. 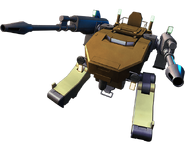