The GM Trainer is a variant of the RGM-79 GM from the Universal Century timeline. It is a part of the Mobile Suit Variations line.

As the Earth Federation Forces began its mobile suit forces buildup during the last months of the One Year War, it also launched an intensive training program, retraining fighter pilots into mobile suit pilots. To fulfill this task, a two-seat trainer variant of the standard GM was produced. The trainee pilot would sit in the standard cockpit while the instructor pilot sat in another seat above his, equipped with a small window for observation purposes. The TGM-79 GM Trainer (the T standing for Training) mimicked the standard GM in almost every respect, although it was built with weaker armor to reduce costs. Since its cheap armor made it unsuitable for combat, the GM Trainer was also relegated to engineering and construction duties.

The GM Trainer is equipped with a beam saber stored on the left side of the backpack. The beam saber is a small device held in the mobile suit's hands when operated and is powered by a rechargeable energy capacitor. The beam saber emits a blade of plasma contained by an I-Field and can cut through most armor not treated with an anti-beam coating.

A handheld mega-particle gun with a lower focusing rate than a beam rifle and short-range. The beam spray gun features three different firing modes: a basic single-shot mode, a burst shot mode for area suppression, and a range shot mode that scatters the beam to cause damage over a wide area. Output 1.4 MW.

The bullpup machine gun was a system weapon developed as a Space/Ground dual-use projectile weapon. Though compact, it has sufficient anti-MS firepower while maintaining accuracy. Its muzzle velocity is increased due to the use of new gunpowder and this enables it to easily penetrate the armor of Zeon's mobile suit. A box-like sensor system incorporating a video camera and laser sensor is installed at the top, and when this system is used alongside the GM's targeting system, target acquisition capability is enhanced.

The standard armament for Federation mobile suit ground forces during the One Year War was developed by Yashima Heavy Industries. It has an alternate model number: "NF·GMG-Type.37/100mm". Equipped with a box magazine and folding stock, it has an excellent rate of fire and is easy to wield. It utilized a smoothbore type barrel that lacked rifling and has to be replaced after firing 3000 rounds. The weapon could utilize three different types of ammunition: HEAT (High Explosive Anti Tank), APFSDS (Armor-Piercing Fin-Stabilized Discarding-Sabot), and HESH (High Explosive Squash Head), allowing combat units to select the appropriate type to meet operational needs.

A basic defense armament for many Federation mobile suits. It is composed of a triple honeycomb structure made of Luna Titanium and the surface also has anti-beam coating for defending against beam attacks.

Unlike the Principality of Zeon, which had been preparing for Mobile Suit warfare for years even before the One Year War, the Federation was basically building up MS forces from scratch. Despite the existence of experimental units (e.g. the 07th and 08th MS teams) and the priceless data taken from the Gundam's learning computer, the Federation still needed to train many more pilots to take full advantage of the GM. The TGM-79 GM Trainer was one answer to this problem. By coupling an instructor with a potential pilot, the Federation hoped to dramatically speed up the training of pilots. Not all fighter pilots, for example, were suitable to be retrained as MS pilots, and it was hoped that the presence of an instructor would help quickly weed out the unsuitable. 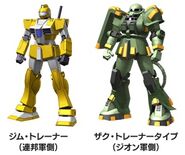 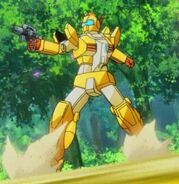 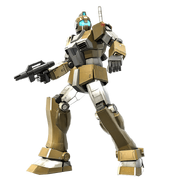 Retrieved from "https://gundam.fandom.com/wiki/TGM-79_GM_Trainer?oldid=465090"
Community content is available under CC-BY-SA unless otherwise noted.