The TGM-79C GM Canard is essentially a headless GM, its design features an outer layer composed of plastic parts that will weather damage and be cheaper to replace than full metal. The GM Canard can operate on the ground and in space, and its standard weaponry include a beam rifle, a beam saber and a shield. Its cockpit monitor supports both the standard 120° view of early Zeon Mobile Suits and the panoramic view incorporated into later machines. The GM Canards can be remote-controlled by the TGM-79C GM Cannes using a system, termed "Synchro Mode", that allows the instructor/pilot to take control of nearby GM Canards during an emergency.

The GM Canard has a single beam saber stored in the right side of the backpack. The beam saber is a small device held in the mobile suit's hands when operated and is powered by a rechargeable energy capacitor. It emits a blade of plasma contained by an I-Field and can cut through most armor not treated with anti-beam coating.

The standard ranged armament of many mobile suits is the beam rifle. The particle beam fired from a beam rifle can penetrate almost any armor not treated with specific counter-measures. The beam rifle has a power rating of 1.9 MW and is powered by a rechargeable energy cap.

The TGM-79C GM Canard was one of the primary training MS employed by École Du Ciel along with the older and more standard TGM-79 GM Trainer, RX-75 Guntank Mass Production Type along with another as yet unidentified GM variant. It was also implied that a handful of other institutions similar to École stocked them. Their usage was primarily between the Delaz Conflict and First Neo Zeon War.

Despite being a test MS and even less suited to combat than the standard GM Trainer, the units of École fielded it in combat scenarios multiple times against Marie Albertia's Pirates. The GM Canard's advantages lie in its internal adaptability, as it was designed for general training, it's fairly high maneuverability (especially in space) and the heavy armor it sports - as it was designed to take severe beatings from students who did not know what they were doing. 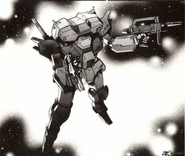 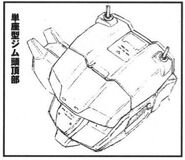 Retrieved from "https://gundam.fandom.com/wiki/TGM-79C_GM_Canard?oldid=439353"
Community content is available under CC-BY-SA unless otherwise noted.