The TFA-2 ZuOOT is a mobile suit introduced in the anime Mobile Suit Gundam SEED.

An artillery mobile suit introduced in the earliest stages of ZAFT's Earth invasion, the ZuOOT was not based on space suits like the mobile suits derived from the ZGMF-1017 GINN, but on worker machines used for construction in space.[1][2] The ZuOOT was heavily armed, with a pair of twin cannons on its shoulders, a pair of twin secondary cannons on its left forearm, a handheld heavy assault machine gun, and four chest-mounted small caliber Vulcan cannons for close-range defense.[1][2]

The ZuOOT can transform between a humanoid MS Mode and a Tank Mode, with the latter providing greater stability while firing its cannons and enabling better movement capabilities across certain terrains such as deserts.[2][3][4] Due to its limited mobility and poor close combat capabilities, the ZuOOT was more like a movable gun turret than a true mobile suit, and it was used mostly to provide fire support from the rear.[1][2][3] Like the GINN, the ZuOOT has a crest-shaped sensor array on its head, above the mono-eye, and this allows for real-time battlefield information to be displayed in the cockpit.[1]

The most powerful weapon of the ZuOOT, two such double-barreled cannons are mounted on the shoulders, and they serve as the suit's main weapon during long range bombardment.

Mounted on the left arm, this secondary cannon is for intercepting fighter jets and anti-MS combat.

The ZuOOT has four chest-mounted vulcan cannons. These small caliber weapons are used to shoot down incoming missiles and enemy units at close range.

A handheld weapon, it is weaker than the secondary cannon and like the vulcan cannons is used to shoot down incoming missiles and enemy units at close range. It is also known as "Short Barrel Heavy Assault Machine Gun".[5]

The ZuOOT never received adequate testing before deployment, as doing so would require converting PLANT's precious natural environment to recreate the desert and coastal environments found on Earth. As a result, it had already become outdated during development.[6] However, when it was unveiled along with the TMF/A-802 BuCUE on March 15, C.E. 70,[7] it was considered a greater threat than the latter by the OMNI Enforcer due to its obvious heavy firepower.[8]

On May 30 of C.E. 70, a group of ZuOOT under Andrew Waltfeld performed an amphibious landing at the coast of El Alamein, one of which was piloted by Waltfeld's lieutenant, Martin DaCosta. Unfortunately, they proved no match for the OMNI Enforcer's Linear Gun Tank corp led by Morgan Chevalier. Due to their large form factor and lack of mobility, more than half of them were disabled.[6] However, the ZuOOT landing force was a decoy: taking advantage of their firepower and heavy armor, Waltfeld used them to keep Chevalier's tank corp occupied while he led a group of BuCUEs in crossing the Qattara Depression, which was thought to be impassable by any land weapons. The tanks were unable to match the BuCUEs' superior mobility, with most being reduced to scrap metal.[6]

During the Battle of Talbadiya on February 28 of C.E.71, Waltfeld stationed several ZuOOTs on top of his Lesseps and Petrie-class land battleships as movable gun turrets in the battle against the Earth Alliance's mobile assault ship, the Archangel. This battle ended with the defeat of Waltfeld's team.[9] Later, several ZuOOTs were present during the attack on JOSH-A. However, they were once again defeated by linear gun tanks defending the base, which were in turn destroyed by a group of BuCUEs.[10]

After the end of the First Alliance-PLANT War, an upgraded version of the ZuOOT was created, called the TFA-4DE GAZuOOT, and the ZuOOT was completely phased out of service by C.E. 73.[11]

Front (The End of the Sandstorm, HD Remastered)

Shot by "Agni" 320mm Hyper Impulse Cannon from Skygrasper equipped with Launcher Striker (The End of the Sandstorm, HD Remastered)

Destroyed (The End of the Sandstorm, HD Remastered) 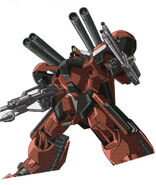 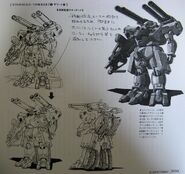