The TBG-011B Try Burning Gundam is a Gunpla from Gundam Build Fighters Try. It is an upgrade of the BG-011B Build Burning Gundam, piloted by Sekai Kamiki.

Compared to its predecessor, the BG-011B Build Burning Gundam, the Try Burning has reinforced joint armor and is installed with a new system known as the "Burning Burst System" to maximize its Plavsky Particle emission. Similar to the Build Burning, the Try Burning's transparent blue parts are for storing Plavsky Particles for later emission, and more of them are hidden below the armor. Although the suit has no shield, it can defend against projectile and ranged beam attacks using its elbow armor like its predecessor. The suit can also release Plavsky Particles from it soles in an attempt to protect itself from attacks below. Normally, these Plavsky Particles are used for propulsion, much like those released from the Gunpla's back.

When Sekai assimilates with Try Burning, its performance improves by more than 3 times and the transparent blue parts turn orange from the change in the Plavsky Particles' color. Furthermore, all the Plavsky Particles stored in the suit can be released at once, and this causes the entire Try Burning to be engulfed in flames. The suit also gains the ability to generate a barrier during assimilation. The weakness of assimilation is that the damages sustained by the Gunpla are reflected onto Sekai. Before the finals of the U-19 Championship, the Try Burning was remodeled so that its polycaps are interchangeable with that of its teammates. This allows the damaged Try Burning to be repaired using its teammates parts, allowing it to fight properly during the overtime battle as the team's representative.

By controlling the particle emission during assimilation, the Try Burning can generate a barrier to protect itself or its teammates.

Designed by Yuuma Kousaka, the Burning Burst System is used during assimilation. This system allows Try Burning to purge parts of its external armor on the clavicles, shoulders, forearms, side skirts and lower legs, revealing the transparent parts hidden beneath. The purging of parts allows for the smooth release of the Plavsky Particles stored in the transparent parts, and thus helps to maximize Try Burning's Plavsky Particle emission.

Like the Build Burning, the transparent parts are an application of the GAT-X105B/ST Star Build Strike Gundam's RG System. The core unit of these parts are located in the chest and when it is activated, the Try Burning is revitalized and Plavsky Particles are released directly from storage.

After activating the Burning Burst System, the Try Burning can use the released Plavsky Particles to form a handheld fire sword for close combat. The nature of this weapon seems to be similar to the Shining Gundam's Shining Finger Sword.

The Try Burning releases a large amount of Plavsky Particles while punching after assimilation, and this creates a powerful fire attack in the form of a phoenix. Thanks to the Burning Burst System, the Try Burning can execute this attack without damaging itself, unlike its predecessor. This is Sekai's first original technique.

Used after Sekai assimilates with the Try Burning, fire engulfs the entire right forearm, which is then used to punch the ground and send a wave of blazing flames towards the target.

A punch executed with a fist rotating at high speed. The rotation serves to increase the destructive power of the punch, and causes Plavsky Particles to be scattered away from the fist. When executed during assimilation, the fist is engulfed in flames.

A high speed spinning kick executed in mid-air. Furious spinning done by Try Burning Gundam prior to launching the kick serves to enhance the attack's destructive power, and also creates a twister that is capable of parrying enemy attacks (including missiles and other projectiles).

A punch that is capable of stirring up the wind and scattering Plavsky Particles away from the playing field.

Created by Sekai during his battle with NK-13J Denial Gundam, the use of this move seems to be linked to the RG's Core Unit. In this attack, the Try Burning creates multiple Plavsky Particle projections of itself that are capable of attacking the enemy using various Jigen Haoh School techniques. When required, each projection is capable of instantly shifting its position in a teleportation-like manner. After the projections have finished their attacks, Try Burning then lays its hand on the opponent and blasts through it with a powerful yellow beam.

Executed with the help of the Plavsky Power Gate generated by Star Winning's Star Funnels, the Try Burning flies through the gate after activating the Burning Burst System. Try Burning rotates its fist as it passes through the gate, and it is then engulfed in flame, taking on the form of a phoenix. 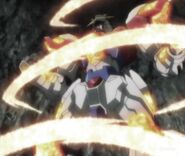 After blocking attack with Barrier (Ep 17) 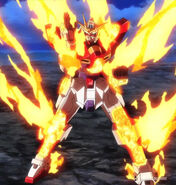 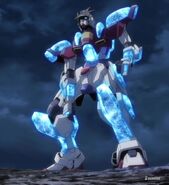 After using Unnamed Technique A (Ep 20) 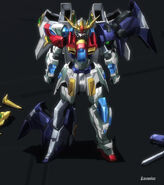 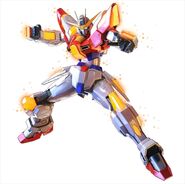 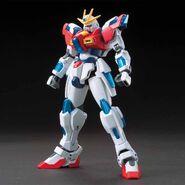 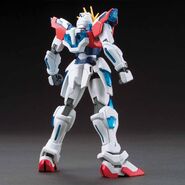 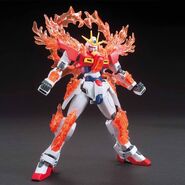 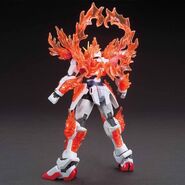 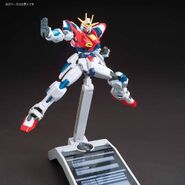 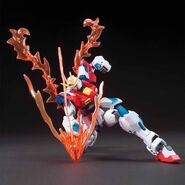 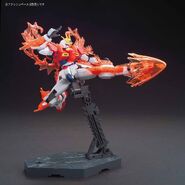 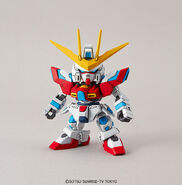 Retrieved from "https://gundam.fandom.com/wiki/TBG-011B_Try_Burning_Gundam?oldid=466785"
Community content is available under CC-BY-SA unless otherwise noted.