The T1 Shuttle Gundam is a mobile suit featured in Hobby Japan's HOW TO BUILD GUNDAM 3 Z GUNDAM.

In March U.C. 0083, the Earth Federation government requests the armed forces to develop an all-purpose variable mobile suit similar to the Gundam to inspect Axis's activities. This unit, codenamed "T1" (Trial Unit 1), is based upon blueprints for the FA-78-2 Heavy Gundam and the first prototype is completed the following year. It is capable of launching and leaving the Earth's atmosphere on its own power. 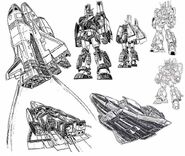 Retrieved from "https://gundam.fandom.com/wiki/T1_Shuttle_Gundam?oldid=454361"
Community content is available under CC-BY-SA unless otherwise noted.