Syam Vist (サイアム・ビスト, Saiamu Bisuto?) is a character from Mobile Suit Gundam Unicorn. He is the founder of the Vist Foundation.

The founder of the Vist Foundation. Syam is the grandfather of Cardeas Vist, and has been alive even before the Universal Century. During the events in UC 0096, he was one of the few who knew the whereabouts of Laplace's Box.

He was originally a young child born in a small country located in Western South Asia. He became a terrorist because of the twisted society and tough life he faced. The terrorist group he worked for was hired by Georges Marcenas. They were assigned to attack the Laplace Space Colony during Ricardo Marcenas's speech, which was a ceremony heralding the end of the Common Era/Anno Domini calendar and the beginning of the Universal Century. The attack claimed the lives of all the people within the colony and almost all of the terrorists. Syam, the only survivor, came into possession of the original Universal Century charter. As the Federation created a new charter that lacked the last article, dictating that human who develop new abilities in space would be included in government, Syam kept the original charter, which eventually became known as the "Laplace's Box". Through underworld connections, he used the box to gain power within the Federation, but he never made unreasonable demands. He founded the Vist Foundation and fostered the developing of Anaheim Electronics. At first the box's existence would only scandalize the current administration. But when the One Year War occurred and Zeon began to call out for spacenoid independence, Syam and the Federation government then understood the power of the box; the charter itself validated the existence of Newtypes and thus they decided to keep it hidden.

Even in UC 0096 he is still alive due to use of cryonics. By this time, the Vist family had plans to end their stewardship of Laplace's Box, the source of the Vist Foundation's prosperity, by handing it over the remnant faction of Neo Zeon. Despite the fact that giving up the box may cause chaos on an unexpected level, including the possibility of the overthrowing of the Earth Federation, Syam believed that the flaws of the Universal Century, which were created somehow due to the box, needed to be corrected. Syam then told Cardeas, who was to carry out this plan, his thanks and asked for forgiveness. His grandson turned away, admitting that what they were going to do may lead to the destruction of the world and all he has left is to forgive. Syam then went to sleep.

Syam later woke as a news cast detailing a Zeon remnant attack on Dakar displayed on his hideout's viewscreens. As Gael Chan, Cardeas' aide, joined his bedside, he reported that they had not heard anything about the Unicorn Gundam since it plunged into the atmosphere and is uncertain why Cardeas would choose Banagher Links, Syam's grandson, as the bearer of the box's key.

Syam later woke once again with Gael by his side as they awaited the return of the Unicorn to Industrial 7, where Laplace's Box resided.

Eventually, Banagher and Princess Mineva Lao Zabi made it back to the Vist Mansion in Magallanica. Syam then remotely stopped Magallanica's rotation to open a passage between his sanctum and the mansion. As the two descended the shaft, Syam projected images of millions of fish and explains that it took billions of years for those fish to adapt to their environment, and another billion for that life to take on human form. Life itself cannot be understood in a human's short lifespan, but Newtypes represent an expansion of cognitive ability, which leads to an expansion in human consciousness. He then shows them footage of representatives of Earth's nations signing the Universal Century charter monument.

When they finally reach the bottom, they see Laplace's Box and the extra article. Syam, along with Gael, standing right behind them, make their presence known and says that the box is the curse of the Universal Century, but was also a prayer. Gael then formally informed Banagher of Syam's identity as his great-grandfather. Realizing they had been watching them the whole time, Banagher was about to launch a tirade for Syam's inaction, only for Mineva to silently ask that she speak instead. She demanded to know why he chose to give up the box after years of extorting the Federation. Syam explained that by UC 0100, the autonomy of the Republic of Zeon would be revoked. Likewise, the name of Zeon Zum Deikun, his Newtype ideology and the curse of the box would sink into nothingness. Hence, that is why he chose to come out now with the Box, and offer it as a prayer towards the "God" known as possibility. However, Mineva felt that if they go through with this, a war would break out. As the box was signed by Earth's nations, the final article carries the weight of the law; if Neo Zeon got a hold of the box, they would use it to overthrow the Federation and start another One Year War. Syam then said that is why he believes that the box should be entrusted to Newtypes like her and Banagher. Gael then explained that the La+ Program was a system designed by Cardeas to identify a true Newtype. However, he never planned on Banagher becoming the Gundam's pilot.

Suddenly, Magallanica suffers a sudden tremor. Syam bids Gael away and tells Banagher and Mineva that the colony builder was built in anticipation of this day. He then spots on the monitors Riddhe Marcenas/RX-0(N) Unicorn Gundam 02 Banshee Norn coming to assist them. Mineva asks Syam what that day he was anticipating is, and Syam explains that due to his age, he wanted to entrust the charter to Newtypes, if they actually existed. He tells them that Newtypes would be the ones to entrust the future of humanity to, as they could set the world right. If technology such as the psycoframe was being developed for Newtypes, he wanted to find out for himself if they in fact did exist. Syam goes on to state that it is only his own desire, and that there are as many desires as there are human beings. He then asks what Banagher and Mineva desire, and what they will do now that they know the truth about the Box. He explains that they had the choice of leaving the Box unopened, taking it with them, destroying it, or even killing him. Banagher replies that if Newtypes are the future of humanity, they can't be identified by humans at this point in time and doesn't believe either he or Mineva have the qualities that Syam is looking for. He goes on to admit that he doesn't know what's the best solution for everyone, but then says that as only one human, he still wants to believe in the power of possibility, and the potential of mankind. With that, Syam connects Magallanica to communication networks throughout the Earth Sphere.

Suddenly, they are interrupted by Full Frontal, who states that the contents of the box should be kept secret to bargain with the Federation for the freedom of spacenoids. Mineva tells Frontal to leave them, calling him a mere copy of Char Aznable and wonders if his Side Co-Prosperity Sphere is what people truly want. However, Frontal states that he is no longer a empty vessel, and it is not he that wishes to see Laplace's Box, and states that he doesn't know whose brainwaves he has been given. He unmasks and asks Syam to hand him the charter without interference, firmly telling Mineva and Banagher that this isn't a proxy negotiation. Syam admits that there is some truth in Frontal's words if the Box remains unopened so that humanity could continue living in the reality they've always known, although it is all the more reason that neither one of them should have the Box, for it should no longer be used as a bargaining chip. Syam believes that their time is over and it is time to hand the future over to their children. Frontal asks Syam if he believes Banagher and Mineva are true Newtypes, but Syam replies that it doesn't matter whether they are Newtypes or not because Banagher and Mineva have successfully followed the path to the box. Furthermore, because they have made their decision on the Box's fate, he tells Frontal that he intends to respect that decision. With his request turned down, Frontal draws a gun and prepares to take the charter by force, but Syam forces him to withdraw using laser guided weapons, remarking that Frontal truly is a ghost. Gael radios that Magallanica is being hacked into by a new psyco machine, and Syam tells Gael to guard the communications unit with his life, or they will be unable to broadcast to the world. Syam then reopens the passage back to the Vist Mansion so Banagher could get to the Unicorn Gundam.

As they watch Banagher/Unicorn and Riddhe battle Frontal/NZ-999 Neo Zeong, Syam wonders outloud what sort of future is out there and if anything would change. The final article is merely just words and are interpreted as how it suits one's best interest. He predicts that if the box is opened, naturally there would be civil unrest, perhaps even a movement to enforce the final article. However, Syam wonders if Newtypes truly exist. Even after many investigations and discussions have ended, they may not reach a conclusion and the whole issue will be forgotten. Mineva tells him that Banagher would do what's right, like the people who signed the charter, as well as Syam who guarded it. Remarking that Banagher has found a good partner in her, Syam tells Mineva that she should be the one who should tell the Earth Sphere the truth of Laplace's Box in her own words.

After Banagher defeats Frontal, he warns everyone that Magallanica is being targeted by the Gryps II laser. Planning on putting up a psychofield to protect Industrial 7, he urges Mineva to take Syam to safety. However, the princess refused, instead ordering Banagher to come back alive. Soon, everyone could do nothing more but shield their eyes as the Unicorn and Banshee put up a three-layered psychofield to block the laser. Immediately afterwards, Mineva broadcasts to the Earth Sphere, revealing them the truth of the original Universal Century charter. Glad that his one wish had been fulfilled, Syam passes away peacefully. 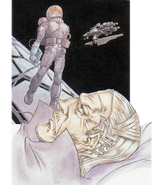