As a child, Sven was a cheerful boy with a great fascination towards astronomy. After his parents died and he became an orphan, Sven was eventually adopted by the Earth Alliance military to become a career soldier. His training hardened him as a person. He became a professional soldier, never once questioning his orders, even if it meant killing civilians. The training he received was related to the Blue Cosmos group, therefore a great deal of his training was to view Coordinators as inhuman but, unlike most, he did not hate Coordinators and managed to resist the Blue Cosmos indoctrination.

During the Break the World incident, Sven and Shams Couza watch as the ruins of Junius Seven come crashing down onto Earth while listening to a radio news broadcast. At this time, Mudie Holcroft comes and informs them that they may be going into battle soon. Later at an Earth Alliance base, top officials discuss reports of ZAFT terrorists attacking Earth Alliance forces bases, because of this, Sven's Phantom Pain group is dispatched to assist an Earth Alliance base being assaulted by the ZAFT terrorists loyal to Patrick Zala.[1][2]

Sven and his team were able to arrive in time to save the base and easily destroy the ZAFT forces. At the command center, Sven's commander, Joaquin, noted with his superiors that the insurgents were more well armed than expected, most likely because they believed they were going to face the GFAS-X1 Destroy Gundams, and he suggests they refrain from launching a full-scale retaliation. Later, in a bar, Sven, Mudie and Shams, along with other Alliance soldiers, watch a video that was made by the three children who piloted a ZGMF-1017 GINN Insurgent Type in South America. It is revealed that the children had lost their parents, who were Coordinators, to Naturals and thus called for the extermination of Blue Cosmos and all Naturals. At the same time Sven has a flashback to his childhood where he wanted to become an Astronomer. Unfortunately, his parents are killed in a terrorist bombing at a space museum. He was then taken care of by a relative or a stepmother. She signed some sort of an agreement with the Blue Cosmos and thus he is taken into the anti-coordinator training program for the Alliance. She is then seen crying when Sven was taken by the Blue Cosmos and made an attempt to chase the truck, but failed in doing so and gave up.[2]

Later on, Sven and a team of GAT-01A2R 105 Slaughter Daggers are ordered to eliminate a Coordinator refugee camp which is believed to be training terrorists. Sven questions if his targets are only the terrorists but his superior asks him if he can distinguish between terrorists and civilians, and he says he does not know. The team lands in front of shocked refugees and Sven has another flashback of his training at the anti-coordinator program. Muruta Azrael appears in Sven's flashback, seemingly watching over his progress. Sven then gives the order and the entire camp is slaughtered. Sven himself is then shown standing over the ruins in the aftermath of the elimination.[2]

On a cold northern plain of Russia the Earth Alliance ground carrier Bonaparte, which is carrying the Destroy Gundam (to be piloted by Stella Loussier), is under attack by several ZAFT units. Sven and team engage in battle with several TMF/A-802 BuCUEs and the TMF/A-802W2 Kerberos BuCUE Hounds. Unfortunately, Mudie's GAT-X1022 Blu Duel Gundam is eventually mauled by the Kerberos BuCUE Hounds, resulting in her death, much to Sham's dismay. However, Sven shows almost no emotional response to his comrade's death, although he did avenged her by destroying the Kerberos BuCUE Hounds.[2]

On board the Bonaparte, some time later, Sven passes by Neo Roanoke and Sting Oakley, who are escorting Stella Loussier on a stretcher. Shams wonders what was going on, and Sven comments that "it" was probably a ruined Extended seeing as how they don't live long. Shams then informs Sven of their new orders to infiltrate DSSD and steal the new mobile suit being produced there, and adds that they have full authorization to use whatever means necessary.[2]

After heading into space, Sven and the Phantom Pain team attack the DSSD space station while Selene McGriff sorties in the GSX-401FW Stargazer Gundam and uses its Voiture Lumiere as an offensive weapon. While engaged in combat with the Stargazer, Sven is caught off guard after hearing of Shams' death and the destruction of the GAT-X103AP Verde Buster Gundam, and Selene is able to cut off one of the Strike Noir's arms. Selene orders DSSD to fire the propulsion beam, which hurls the Stargazer and the Strike Noir out near Venus. This severely damages the Strike Noir, but doesn't destroy it completely. After drawing the last bit of energy from the Strike Noir's battery, Selene brings Sven aboard the Stargazer and sets a course for Earth using the Stargazer's Voiture Lumiere solar sails. She also administers a drug to knock both of them out for a maximum period of 27 days, to conserve their remaining oxygen. They are found alive 669 hours (27 days and 21 hours) later by Sol Ryuune L'ange.[3][4] Sven, then joins the DSSD after being rescued. 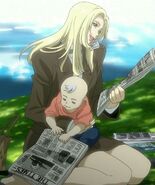 Young Sven with his mother.

Sven as a child 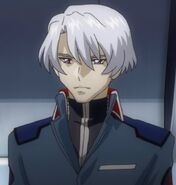 Sven and Selene in the Stargazer Gundam's Cockpit 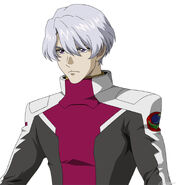 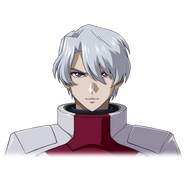