The Super Shock Gundam (スーパーショックガンダム, Sūpā Shokku Gandamu?) is a Gunpla from Gundam Build Divers. It is a combination of five SD-type Gunpla.

A large handheld weapon formed from the combination of the five component Gunplas' individual handheld weapon. It fires a powerful beam blast that has the output of five Gunpla.[1] 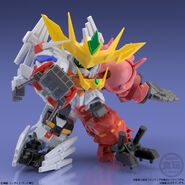 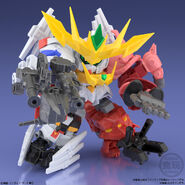