One of the oldest pilots in the Guinea Pig squadron. He is an adjutant by rank. His MS piloting skills are inferior to those of Yuu and others, and in the simulator battle with the RX-78 Gundam, he was destroyed in less than five seconds. However, because of his faithfulness to the basics of piloting (Alph Kamra says he is "the ideal pilot for mechanics"), he was very useful in the subsequent development of mobile suit operating systems. After the Gryps War, he became an instructor at a military academy, training many new recruits and sending them into the army. In the 2015 manga, he plays an active role as a member of the Guinea Pig squadron as in the original story. He pilots the GM Command Cannon when Yuu becomes the pilot of the Blue Destiny 1 and Philip the pilot of the GM Dominance. 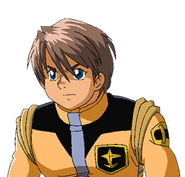