The Sumeragi is a highly-advanced vessel designed for deep space exploration and is featured in the epilogue of Mobile Suit Gundam 00 The Movie: A wakening of the Trailblazer. It is described as the "pride of the Earth Sphere Federation".

The Sumeragi and its sister ship, the Tieria,[1] were developed 50 years after the dialogues with the ELS and is stationed at the flower-shaped space station which was once the home base for the ELS. With humanity now living in harmony with the ELS, the ship is managed by a group of Innovators (led by Amia Lee) and is a technologically advanced vessel that is designed to explore deep space.

The ship is assigned highly versatile Sakibure MS for its deep space journey. Because of the expansion of lifespans, being able to communicate using quantum brainwaves and several abilities far more enhanced than humans, Innovators are ideal for such long deep space exploration, while the remainder of the human population on Earth undergo Innovation. Known Innovators and people in the vessel are Klaus Grad and Leonard Fiennes. The ship line was named in honor of Celestial Being's tactical forecaster Sumeragi Lee Noriega.

With the Quantum Teleport System the Sumeragi and its sister ship can travel through space. The transition system is quite similar to the process of quantization, which was employed by the GN-0000+GNR-010 00 Raiser 52 years prior, though the transition system allows for a much greater distance of travel.

This outer-space navigation ship was commissioned in 2364 AD. All 1,200 crew members are made up of pure species of Innovators. Leonard Fiennes, who preceded the ship aboard a Sakibure, has discovered a planet inhabited by unknown life forms in space unreachable by humans, and that planet is the destination of the Sumeragi. 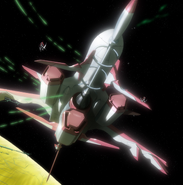