She is a woman who always takes a brute approach to solve her actions. She can be emotional at times, as seen when she gave Telicyra a hug after mistakenly assuming that he is her brother due to their similar appearance.

As a soldier of Katharon, she is skillled in mobile suit piloting. Sulu Suluzu is also an Innovade and thus able to utilize quantum brainwaves to telepathically communicate with other Innovades, and utilize quantum networked devices.

An Innovade of the same base sequence type as Telicyra Herfi, but her sex is set as female. Currently a member of Katharon. In chapter 5 of Gundam 00I, Sulu Suluzu battles against the Earth Sphere Federation Forces in her MSJ-06II-A Tieren Ground Type. Later, Lars Grise attacks them while they’re resting after battling the first wave of the Federation Forces. “Pretend humans have no right to live,” Lars declares. And Telicyra objects, “Is there such thing as a life without merit!” Telicyra then shields Brad, an Innovade, from a bullet with his body. Sulu rushes over to Telicyra, whose life was saved by a bulletproof vest. “Same face…” Telicyra hastily lies, “My sister! I’m your older brother!” Moved, Sulu embraces him.

In chapter 7 of Gundam 00I, Telicyra, Sulu, and Hermiya returns to the base and find Brad had massacred all the Katharon members. The combat-use Innovade, Brad, attacks Sulu saying “Eliminate the eye-witnesses!” He grabs Sulu and started to choke her till seeing that spectacle, Lars uses his ability and takes remote-control of three Tierens. The Tierens come to life at once to attack Brad, Killing Brad and saving Sulu's life in the process. In the epilogue of Gundam 00I chapter 14, Telicyra, Sulu, Hermiya, and Bryn are now living together. 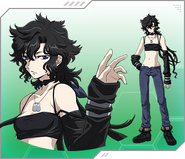