Suberoa Zinnerman is a battle-scarred Zeon veteran of the One Year War. He fought in the African front until the end of the war, later being forced into prison life. During that time, his family lived in Globe city in Side 3, whose inhabitants were being ruthlessly slaughtered by Federation occupation forces. His wife and child were among those killed. Zinnerman was devastated upon learning the existence of circulated video footage related to their deaths, and so he continued fighting as a soldier with his subordinates. He pursued the individual who spread the video, eventually traced to a brothel, and discovering a debilitated girl in the process. Zinnerman took her away, becoming her adoptive father and giving her the name "Marie", the name of his deceased daughter. She would later be known as his subordinate, Marida Cruz. After the end of the Gryps War he was charged with protecting Mineva Lao Zabi.[1] By U.C. 0096, he is the captain of his own ship, the Garencieres.

In U.C. 0096, Zinnerman and the Garencieres are dispatched to Side 4's Industrial 7 colony as envoys of "The Sleeves" to meet with the Vist Foundation leader, Cardeas Vist, to receive "Laplace's Box", a mysterious object that is rumored to hold a secret that could lead to the downfall of the Earth Federation.

Enroute, the Garencieres was pursued by a Londo Bell Clop-class, which dispatched three Jegan to intercept. Zinnerman sent Marida out in the NZ-666 Kshatriya to deal with the mobile suits, but ordered her to ignore the mothership, confident that the Garencieres could outrun it.

The Garencieres soon made it to Industrial 7 and dispatched a Gearu Zulu to prepare for the contingency should the meeting be a trap. However, the crew soon learned that Princess Mineva Lao Zabi had in fact stole aboard. Marida blamed herself for not noticing this, but Zinnerman corrected her; he bears responsibility as the commanding officer of the ship. Zinnerman ordered Marida and a few others to find the princess before she could make contact with Vist, but they suffered interference from a civilian named Banagher Links.

After Marida's failure, they received a change in the meeting point with Vist. Zinnerman, Flaste Schole and two of his subordinates met with Vist in person in his own mansion. However, Vist revealed that they weren't actually handing Laplace's Box over to them, but actually its key. A confused Zinnerman then prods Vist about the underhanded activities his Foundation was involved in. Vist reminds him that the Zeon leader acknowledge the value of what they are offering, which is why they sent Zinnerman to receive it. Zinnerman admits that with the precarious state Neo Zeon is in, they need to seize the moment and would be disappointed if things go sour. Vist explained that he is handing over the key to Neo Zeon as a test, and that if they think that the box will restore the Principality of Zeon, then the box will never reveal its contents.

Their meeting is cut short when the mansion is rocked by a tremor, and the revelation that Londo Bell has invaded the colony. Thinking the meeting was a trap, Zinnerman drew his gun and aimed it at Vist. Vist denied it, arguing that that Zinnerman must have been followed. Zinnerman demanded that Mineva be returned to Neo Zeon, to which Vist admitted that he was intending to return her from the start and explained that she was in his mansion. Zinnerman mused that it is difficult now for either one of them to trust each other, and fled before he could recover Mineva. By this time, Federation commandos had infiltrated the mansion and killed two of Zinnerman's subordinates during their escape. Along the way, they ran into Banagher, who was looking for Mineva; Zinnerman stopped Schole from nearly shooting the boy.

Zinnerman and Schole received transport from a Gearu Zulu and they went out into space to signal to Marida/Kshatriya to retreat. Back aboard the Garencieres, Zinnerman contacted Lieutenant Angelo Sauper, who reprimanded him for failing to retrieve Laplace's Box or the princess. Zinnerman admitted that none of this could have been anticipated and advises that they wait until they hear from the latter. Angelo took it that Zinnerman was suggesting that they just stand by and do nothing, only for the Captain Full Frontal to interject, musing that the mobile suit Marida fought was a Gundam. Deciding to see this for himself, Full Frontal ordered Zinnerman to find the Federation mothership, the Nahel Argama, believing that it was carrying the key to Laplace's Box, the RX-0 Unicorn Gundam. Zinnerman complied, promising to make up for this mistake even if it costs him his life. Frontal advises him not to let mistakes weigh him down.

The Garencieres was successful in locating the Nahel Argama by tricking it into destroying a derelict Salamis-class, exposing their location. Zinnerman then had the coordinates sent to the Rewloola, which soon proceeded to attack the Nahel Argama. Marida sortied as well and was successfully able to capture the Unicorn when it came out to face Full Frontal's Sinanju. 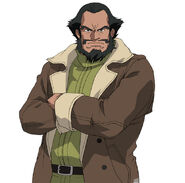 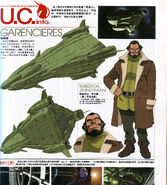