Stuart (War in the Pocket)

Stuart (War in the Pocket)

Stuart (スチュアート, Suchuāto?) is a character from Mobile Suit Gundam 0080: War in the Pocket.

Stuart is the captain of the Pegasus-class assault carrier LMSD-76 Gray Phantom, and the commander of its Scarlet MS Team. He is responsible for overseeing the development and security of RX-78NT-1 Gundam "Alex". Stuart is shown to be committed to accomplishing his mission at any cost, and will not hesitate to instigate battles within a neutral space colony, nor dispatch his forces— including Gundam Alex's test pilot Christina Mackenzie— to fight in a populated city.

During the events of Mobile Suit Gundam Battlefield Record U.C. 0081 -The Wrath of Varuna-, Stuart is promoted to the rank of Lieutenant Colonel and command of the Pegasus-class assault carrier SCVA-72 Thoroughbred. He works in coordination with the Phantom Sweep Corps to hunt down Zeon Remnants. 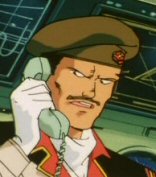 Maj. Stuart as seen in Mobile Suit Gundam 0080: War in the Pocket
Add a photo to this gallery
Retrieved from "https://gundam.fandom.com/wiki/Stuart_(War_in_the_Pocket)?oldid=425867"
Community content is available under CC-BY-SA unless otherwise noted.