Sting Oakley (スティング・オークレー, Sutingu Ōkurē?) is a character from the anime Mobile Suit Gundam SEED Destiny. Together with Auel Neider and Stella Loussier, he was one of the three Extended pilots of the Earth Alliance’s special forces team, called Phantom Pain during the Second Alliance-PLANT War.

Sting is the most stable of the trio and acts as the leader of them. Sting has a calm and caring personality, always showing concern for his comrades, especially Stella. During battle however, Sting becomes incredibly aggressive and competitive. He later develops a rivalry with Athrun Zala, growing increasingly frustrated over his inability to shoot him down during their scuffles with one another. During the Battle of Heaven's Base when he is given a new Destroy Gundam to pilot, the suit's destructive power and the success it brings Sting causes him to completely lose his sanity, becoming just as unstable and dangerous as Stella and Auel. Sting's block word is Dream (夢, Dream?).[1]

Like his fellow Extended pilots, Sting has been through extensive military training and is skilled in the use of firearms, infiltration and Mobile Weapon piloting. In addition to being able to pilot Mobile Suits designed for Coordinators, he is also able to hack and rewrite the operating systems of a Mobile Suit and customize it for personal specifications within seconds. Because Extended pilots are merely perfected for war and nothing else, they all suffer psychological and physical side effects from their enhancements. Their bodies are often maintained by a full medical team, ready with drugs and advanced medical devices to keep them functioning. However, their conditions are often difficult to manage and their lifespan is often limited to a few years due to their unstable nature and being used as living instruments of war.

Together with his teammates, he infiltrated the PLANT colony Armory One, where he stole one of the three new Gundam-type mobile suits, the ZGMF-X24S Chaos Gundam.

He was involved in two other battles in space. The first in a debris belt, and the second on the remnants of the destroyed PLANT colony Junius 7 that was being dropped on Earth by Coordinator terrorists.

After the start of the Second Alliance-PLANT War, Sting and his two Phantom Pain teammates descended to Earth. There they, were again involved in several battles against the ZAFT ship Minerva, with no great success. During this time, Sting fought against Athrun Zala in the ZGMF-X23S Saviour Gundam several times.

Sting and his two comrades later investigated the ZAFT-controlled city Diokia, where the three for the first time met Shinn Asuka and Athrun Zala, however, none of them knew who the other is.

During the Battle of Crete, the Chaos was damaged by Kira Yamato’s ZGMF-X10A Freedom Gundam, however, it was quickly repaired to accompany the GFAS-X1 Destroy Gundam piloted by Stella, which destroys several cities in Europe.

When the battle reaches Berlin, Sting fights against three MVF-M11C Murasames from the Archangel and was defeated when the Chaos was cut in half.

Despite the Chaos' destruction, Sting somehow managed to survive and was transferred to the Earth Alliance stronghold Heaven's Base in Iceland. There, he became the pilot of one of five GFAS-X1 Destroy Gundams and was sent out to defend Heaven's Base when ZAFT's Operation Ragnarok began. During the battle he relishes the power of his new mobile suit and in the process loses what remains of his sanity. He was killed in battle when the ZGMF-X42S Destiny Gundam attacked and skewered his cockpit. Even then, he maintained his obsession with the Destroy Gundam.

In the novel version, two beings who seem to be Auel and Stella appear, and although he has lost his memory, he feels that he has to take care of them and dies in the form of going to them. 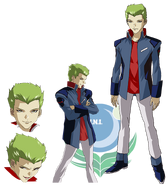 Sting versus Athrun in Episode 27 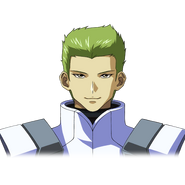 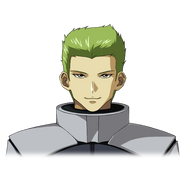