Stella Loussier (ステラ・ルーシェ, Sutera Rūshe?) is a character from the anime Mobile Suit Gundam SEED Destiny. One of the three extended pilots from the Phantom Pain, she served under the command of Neo Roanoke during the Second Alliance-PLANT War.

Stella is a mentally unstable and fragile person. Though it was never fully revealed, it's suggested she suffered severe psychological trauma as a child from the horrors of war. When she's at her best, her personality is that of an innocent child. She's playful, carefree, and has a limited understanding of her surroundings. Because of her childlike behavior, she's not useful for battle unless focused. It's why she was mentally conditioned to react to "die" or "death."

Seeing how she's fearful of dying, Stella's teammates often would use "die" to trigger her to focus. Even though she's a talented MS pilot, her mind is still that of a frightful little girl and often needs direction for action. Her teammates would often direct her wrath upon specific targets, telling her that her opponent is out to kill them all. Because she completely trusts her teammates, she takes action without question. Unfortunately, her own fear of death can be a liability in battle. It's necessary to bring out her anxiety to get Stella to battle, but at times the fear can be so overwhelming that she experiences hallucinations and delusions, at times lashing out to both friend and foe. If Stella's teammates can't successfully calm her fears, the best they can do is either wait it out or sedate her.

Her experiences are manipulated by her commanders and doctors. If Stella experiences something that can potentially contaminate her mind, it can be removed. It's because of that, Stella can at times experience déjà vu, familiarity to people or objects, but at times nothing at all if the mind wipe is sufficient. This is all done for Phantom Pain to manage her fragile mind without her losing direction in their mission.

One of the few people she truly trusts and has genuine affection for is Neo Roanoke, to the point that she disobeyed direct orders and put her ZGMF-X88S Gaia Gundam in a disadvantageous position because she was worried about him in a battle.

Stella is a fully trained soldier and an "Extended". Because of her artificially enhanced abilities, her body and mind can react just as well as a Coordinator or possibly have the advantage over them. Even though her mind is childlike, when focused, she can hack and reprogram an entire MS operating system and customize it for personal specifications within seconds. As a soldier, she knows how to use firearms, stealth infiltration tactics, and MS piloting. Because "Extended" soldiers are merely perfected for war and nothing else, they all suffer psychological and physical side effects from their enhancements. Their bodies are often maintained by a full medical team, ready with drugs and advanced medical devices to keep them functioning. They also require regular re-conditioning.

Together with her comrades Sting Oakley and Auel Neider, Stella infiltrated the PLANT colony Armory One, and with the help of some ZAFT-soldiers, they stole three of ZAFT's newly developed Second Stage Series units. Stella became the pilot of the ZGMF-X88S Gaia Gundam. They heavily damaged the base inside the colony and fought against Shinn Asuka in the ZGMF-X56S Impulse Gundam. During the battle, Stella went completely berserk after Auel mentioned the word “die”. Stella and the two boys nevertheless escaped from the base on the Mirage Colloid-equipped EA vessel Girty Lue but were pursued by the ZAFT-battleship Minerva.

After the “Break the World” incident, Phantom Pain was stationed on Earth on the carrier John Paul Jones and Stella later engaged in another battle with Shinn at an under-construction alliance base.

During her stay on Earth, Shinn saved her from drowning after she fell from a cliff, with neither of them knowing who the other was. She initially panicked when he said her block word, "die". Shinn, knowing that Stella was scared to die, hugged her and told her that she wouldn't die, telling her that he would protect her. Stella, recalling that was the same phrase that Neo said to her, started crying in Shinn's arms. He apologized for scaring and upsetting her, and told her to stop crying. He wrapped a handkerchief around her ankle to stop the bleeding. Stella took Shinn's hand, put it on her face, and asked him if he would protect her. He said that he would. Stella became attached to Shinn and they grew closer.

Shinn built a campfire to dry his shirt and her clothes. When she stood up to get a pink shell, he felt embarrassed because she's was topless. During this time Shinn swore to protect her, but when she returned to the Phantom Pain, her memories were erased. When the Minerva was attacked by the joined forces of the Earth Alliance and the Orb Union at Dardanelles, Stella again fought and during this battle, she inadvertently killed the new pilot of the Minerva, Heine Westenfluss.

When the Minerva investigated the extended facility in Lodonia, – the place where the Extended were created – Stella informed both Sting and Auel, the latter suffered a mental breakdown due to believing that his "mother" was still in the lab. Determined to help Auel, Stella boarded the Gaia and broke her way out to attack the Minerva, but was defeated by Shinn and Athrun Zala.

Upon investigating the defeated Gaia, Shinn was horrified to see Stella and violated military law by taking her to the Minerva's sick bay. Due to her highly-aggressive behavior, she was kept forcefully strapped down, with only the constant visits from Shinn calming her down. The Minerva's doctors later revealed to both Minerva captain, Talia Gladys and Shinn that she tested positive for excessive amounts of chemicals within her body, exposing her as one of the Extendeds from Lodonia.

ZAFT's doctors eventually realized that Stella had only been kept alive thanks to a specialized machine in the hands of the Alliance. Without the means or knowledge to create such a machine, she would likely to die, with her corpse being sent to ZAFT's research team for investigation. Rather than allow her to die or become a lab rat, Shinn defied military law once again and took the weakened Stella to the Alliance in secret. She was handed over to Neo, under the promise to not let her participate in any more battles.

After her condition stabilized, Stella was assigned to be the pilot of the gigantic mobile suit GFAS-X1 Destroy Gundam. With her new suit, she destroyed many cities in West-Eurasia until she reached Berlin. There, she engaged in a fight with Kira Yamato in the ZGMF-X10A Freedom Gundam, and later Shinn joined the fight. Although she was able to hold her own against both the Freedom and the Archangel, the Minerva arrived to also engage and sent out the Impulse. Shinn proceeded to charge straight for the Destroy's cockpit and successfully slashed it open. Stella soon suffered from even more stress in the battle when Neo was shot down by the Freedom while the Chaos was destroyed by the Archangel's MVF-M11C Murasames.

As she broke down even further, Shinn, having learned from Neo that Stella was the Destroy's pilot, lowered his weapons and approached Stella, calling out to her. Shinn's voice allowed Stella to finally calm down and stopped her attack. Unfortunately, an explosion in the cockpit brought her back to reality, and she immediately paniced when she saw the Freedom behind Shinn. Unable to control herself, Stella attempted to retaliate once again, before the Freedom finally stepped in, stabbing the Destroy's Super Scylla Cannons before they could fire. The attack caused catastrophic damage to her unit, and Stella was mortally wounded by various explosions as Destroy was finally put to rest.

Shinn rescued her out of the cockpit. She told him that she loved him and died in his arms. Shinn then brought her corpse and sunk it in a nearby lake, swearing to avenge her death at the hands of the Freedom. Shinn then managed to defeat Kira during ZAFT's Operation Angel Down.

After the ZGMF-X42S Destiny Gundam was crippled beyond repair by the ZGMF-X19A ∞ Justice Gundam, Stella appeared to Shinn as a spirit, telling him that she finally got over her past and thus was very happy, providing relief and comfort to Shinn. She bidded him until they saw each other in the future, before passing onto the next world. 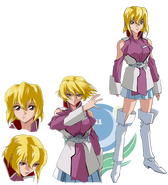 Stella's body sinks into the lake 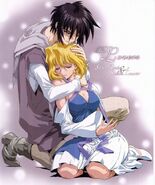 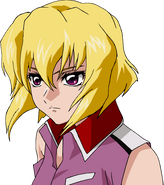 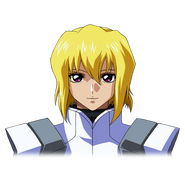 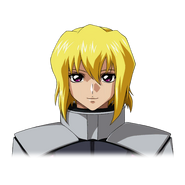 Stella in Alliance vs. ZAFT II PLUS