The Stealth Launch is a spacecraft that appears in the anime Mobile Suit Gundam SEED.

A small spacecraft for covert operations. It is used for space base and colony invasion-landing operations. It carries five airbags in the nose, three normal propulsion units in the rear and two sets of cryogenic exhaust nozzles to avoid heat source detection. 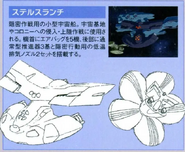