March 30, 1990–March 30, 1990
Stampede: The Story of Professor Minovsky (STAMPEDE ミノフスキー博士物語) manga series takes place in the Universal Century of the Gundam meta-series. It originally appeared in issue 1 of Bandai's Cyber Comix anthology; Gundam Generation 1 is a reprint, a collection of Gundam-themed material from Cyber Comix.

At some point after the end of the One Year War on U.C. 0080, a ship comes under attack by mobile suits piloted by Zeon remnants, knowing the ship is going down a member of the crew tells Professor Minovsky to board the shuttle and evacuate in one of the escape shuttles. Unfortunately a Zaku II begins to open fire on the area of the ship where Professor Minovsky, had been sitting only moments before.

Trenov Y. Minovsky was born in 1983 (U.C. 0015) in the Ural regions near Chernobyl, Ukraine. At age three, Trenov witnesses the Chernobyl Disaster. After moving to America in 1999 (U.C. 0031) he enrolled in school and began research on a fictitious particle known as "Minovsky Physics". But at the time his research was far too unrealistic, and no one understood where he was going with it. However, one of his buddies, Ionesco, informs him that Anaheim Electronics has agreed to sponsor his research. He is thrilled at this, much to the chagrin of Ionesco. Shortly thereafter in U.C. 0040, the Minovsky particle is discovered. However, at a scientific conference, it is determined that the Minovsky particle has no relation to nuclear fusion reactors and that his thesis has no conclusive evidence. The reason behind it comes from Ionesco saying that it only has conventional technological applications. Ionesco also refutes Minovsky's research by stating that a particle with a special nature like it was never detected. As of this, he was deemed an impostor and forever banned from the scientific community. A short time later, he is approached by a representative of Zeon Zum Deikun and later moves to Side 3 in U.C. 0045, and around the same time he created a nuclear fusion generator which was then used to create an artificial Sun for the Colony. At the same time, the "Minovsky Physics Society" is established and weapons development is started. However, as he becomes increasingly obsessed with weapons development, which leads to his wife leaving him. Following the death of Zeon Zum Deikun in U.C. 0070, Minovsky receives an award for his developments, but tosses it aside in front of the entire Zabi family. From here he goes back to Earth to once again visit what remains his home of Chernobyl. Presumably sometime in U.C. 0080 he declares silently to himself that he "beat you", referencing the atomic bomb, but, as Minovsky existence alone had brought about more destruction than the atomic bomb, he also goes on to say that he also probably lost to you (referencing the Gundam), in the end anyhow. 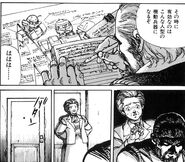 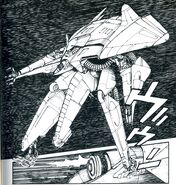