Stalker appears at the beginning of each episode of Mobile Fighter G Gundam from the second episode onward to provide information about the plot of the episode, as well as provide information about the universe of Mobile Fighter G Gundam in general. Stalker also narrated the preview for the following episode which appeared at each episode's ending. 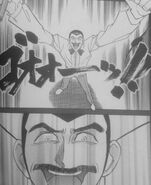 Retrieved from "https://gundam.fandom.com/wiki/Stalker?oldid=426695"
Community content is available under CC-BY-SA unless otherwise noted.