The Spengler-class is a naval carrier in the Cosmic Era timeline.

The Spengler-class mobile assault landing ship is the largest naval vessel used by the Earth Alliance. It is designed for amphibious invasion, but also serves as a highly effective aircraft carrier, using the Earth Alliance's F-7D Spearhead VTOL (vertical take off and landing) fighters. In CE 71, the Spengler-class was converted to support mobile suits, with two large gates on each side of its hangar for the six mobile suits to exit. The flight deck and rear fighter hanger could also be used to carry additional mobile suits in the place of some or all of the fighter complement. The refitted ships are effective, but cramped, mobile suit carriers. The Spengler’s hangar could also forgo its six mobile suits to carry a mobile armor.

In CE 73, 81st Independent Mobile Battalion commander Neo Roanoke took command of the John Paul Jones, which carried his customized GAT-04 Windam and the captured ZGMF-X24S Chaos Gundam, ZGMF-X31S Abyss Gundam and ZGMF-X88S Gaia Gundam. The John Paul Jones was used to ambush the ZAFT battleship Minerva in the Indian Ocean[3] and later attacked it again during the battles of Dardanelles and Crete as part of a joint task force with the Orb Union aircraft carrier Takemikazuchi and several Orb and Earth Alliance cruisers.[4][5][6] Later, a large number of Spengler-class carriers were among the Earth Alliance forces that joined with ZAFT to attack Heaven's Base in Iceland, after the LOGOS's manipulation of the Alliance was revealed.[7] 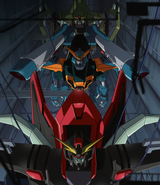 Spengler-class launching Strike Daggers during the attack on Orb, C.E. 71 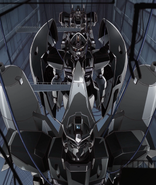 Chaos, Abyss and Gaia inside hangar

Chaos and Abyss inside hangar

Spengler-class ships at Suez Base, C.E. 73