Shortly after the destruction of the Crossbone Vanguard's flagship Mother Vanguard, Anaheim Electronics had scavenged the Minovsky Drive unit from the remains of the vessel and used it do design their own "wings of light" system. The Speed King was the system's testbed, controlled by a docked mobile suit. The machine was codenamed "Icarus" by the SNRI, who observed the machine fall into the atmosphere of Earth during its test flight, but in reality the mobile suit with the Speed King had used its "wings of light" as a shield to protect itself during reentry.

With the loss of the F99 Record Breakers, the Crossbone Vanguard were in a dilemma on how to reach the Jupiter Sphere before the Jupiter Empire fired their colony laser. They began to look for what the SNRI called "Icarus", which as supposedly an Anaheim Electronics mobile suit capable of using the "wings of light". It was revealed however that the Speed King was in fact simply a sail from the Mother Vanguard ship, converted into a dockable unit. With the Icarus retrieved by the Crossbone Vanguard, they would use the Speed King to reach Jupiter in less than a week, rather than the months taken by a regular space vessel. 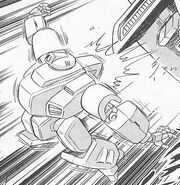 Retrieved from "https://gundam.fandom.com/wiki/Speed_King?oldid=424170"
Community content is available under CC-BY-SA unless otherwise noted.