•Sonken Zephyrantes(Father, not to confuse with Sonken Gundam)

The young prince of Gou. He is a humble and compassionate young noble who does not discriminate anyone under him.

At first his thinking was "is justice more important than a person's live" and with that thought he refuse to fight. But he fell into rage when he witness the death of his father and Somo in battle and summoned the Tengyokugai "Douko" which was in the Korou Fortress, with the "Douko" he fell Korou Fortress. He regretted on the sight of the soldiers who died in his raging rampage, furthermore adding to his guilt Toutaku set fire to the nearby Rakuyou (洛陽). He wanted to return to Chousa at first but Ryuubi and Sousou convinced him to stay and help defeat Toutaku. After the battle he together with Sousou and the others sent Ryuubi, Chouhi and Kan-u off. In the Comic World version, he has done most work in defeating Toutaku and dealt the finishing blow with the Tengyokugai. In the Clash of the Heroes Chapter, he meets Ryuubi again and led the Koutou Navy in the clash with the Keishuu Troops. But in the Gappi battle, following his father's death, he lost his brother Sonsaku. After the battle of the Red Cliff the country Gou is formed, in front of the graves of his father and brother, he swore to protect the people. In the Battle of the War God Chapter, he is frozen by darkness with Rikuson and the others but later freed by the power of the Blade of Heaven. He awakened as Goutaitei and defeated his Shuu possessed brother and is sent off to Gojyogen (五丈原).

Sonken Zephyranthes is his father, Sonsaku his brother and Sonshoukou is younger sister. For Sonken Gundam, the Tengyokugai resembles the Dendrobium Orchis mobile armor. 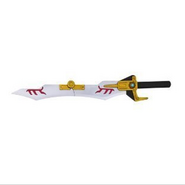 The Majestic Fang Sword. (a.k.a Gaouken (牙王剣))
Add a photo to this gallery
Retrieved from "https://gundam.fandom.com/wiki/Sonken_Gundam?oldid=308692"
Community content is available under CC-BY-SA unless otherwise noted.