Solomon (ソロモン, Solomon?), later renamed Confeito, or Konpei Island (コンペイ島, Konpeitō?), is an asteroid that has been used as a military base by both the Principality of Zeon and the Earth Federation.

Solomon is situated at Lagrange Point 5, amid the ruins of the Side 1 cluster. The area of space surrounding the asteroid is known as the "Sea of Solomon", giving the fortress its name. The asteroid itself resembles a 6-pointed star polyhedron or an octahedron in general shape, with most viewpoints of it having the silhouette of a four-pointed star. This shape could sometimes be interpreted as being able to defend against attacks from the front, rear, right, left, top, or bottom, the endpoints of the asteroid corresponding to the vertices of an octahedron.

After the One Year War, Solomon continued to serve as a military base for the Earth Federation, well into the late Universal Century years.

On December 24, U.C. 0079, the Battle of Solomon was fought for control of the asteroid. The battle was rather one-sided in favor of the Federation, as it was the first battle that saw wide-scale deployment of the Federation's mobile suit forces. During the battle Public-class assault ships were able to neutralize the space fortress' beam cannon defenses with beam-dispersing smoke clouds, forcing Zeon mobile suits stationed at Solomon to advance beyond the base's defensive radius, making them easy targets for advancing Federation warships. The Federation also unleashed their secret weapon: a solar reflector array, known as the Solar System, utterly decimating Solomon's primary space gate and all mobile suits and ships attempting to sortie from there. Due to the destruction of the space gate, the Federation mobile suit forces successfully managed to breach Solomon.[1]

With casualties mounting and reinforcements being delayed by "political complications", Zeon Space Attack Forces commander Dozle Zabi ordered the evacuation of the base and boarded the mobile armor Big Zam. While the Big Zam's initial deployment decimated many Federal warships and mobile suits, allowing many Zeon citizens (including Dozle's wife Zenna and daughter Mineva) to retreat from Solomon, it was ultimately disabled by a daring and sacrificial maneuver on behalf of 13th Autonomous Corps pilot Sleggar Law, and subsequently destroyed by Amuro's RX-78-2 Gundam. Solomon was quickly run over thereafter by the EFSF.[2]

After the battle, Solomon was used as a staging area for the EFSF's invasion of the Principality of Zeon's home territory and was renamed Confeito.

As the war came to a close, Confeito remained a base for the Earth Federation and in U.C. 0083, was the chosen site of a full-scale naval review. This made it the main target for the Delaz Fleet during Operation Stardust. Zeon ace Anavel Gato used the RX-78GP02A Gundam "Physalis" to attack the naval review at Confeito with an MK-82 nuclear warhead, destroying or crippling two-thirds of the Federation's naval forces that took part in it.[3][4]

Despite the damage sustained, the asteroid continued to be a prominent military base used by the Earth Federation. During the Gryps War the base was operated by the Titans, and used to develop the RX-121 Gundam TR-1 (Hazel). By the time of Mobile Suit Gundam F90, it is still being used as a military fortress by the Federation Forces in the U.C. 120s. 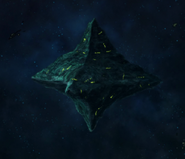 Confeito command center during the Battle of A Baoa Qu (U.C. 0079) 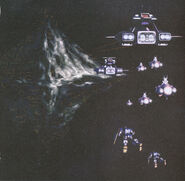