The Soleil is the flagship of the Moonrace from the Turn A Gundam series.

A capital ship of the Dianna Counter faction, the Soleil serves both as a field headquarters for the invasion army and the seat of Dianna Soreil, Queen of the Moonrace during her reclamation campaign of Ameria from the Terrans.

Developed based upon the interesting body design of the Almaiya class assault carriers, the graceful form of the Soleil is wrought several centuries ago using the wonders of nanotechnology. Capable of reaching exit velocity as well as performing independent atmospheric reentry, she is armed with numerous Beam Cannons around her circumference and is shielded by powerful Beam field generators to deflect any incoming attacks. The Soleil is as much a beautiful of work art as she is a deadly siege weapon.

Rising from the center of her great body is a spacious bridge that takes the form of a grand palace. The aft-deck is a large hanger that houses the Royal Guards' assortment of mobile suits and weapons. Also located around the ship are several hidden transport shuttles used to ferry the Queen from place to place at her discretion or used as a means of escape.

The flagship of the returning people from the moon, the Moonrace. The Soleil served as the mobile palace for Queen Dianna Soreil, as well as a command center for her forces as she led them, the Dianna Counter in the campaign to reclaim the lands of Ameria on Earth. 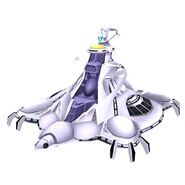