The Skiure is a mobile turret that appeared in the original design series MS-X.

The Skiure is a massive auxiliary weapons platform developed for the express purpose of compensating for the lack of range and firepower of MS during the One Year War. It consists of a large beam cannon mounted on a movable platform. The Skiure was meant to be operated through a Zeon MS standing on the platform. Because the large beam cannon is powered by the Skiure's own reactor, even mobile suits incapable of using beam weaponry were capable of using it.

The Skiure's only weapon is a high output beam cannon that can destroy most mobile suits in one shot or damage a ship.

Developed during the One Year War by the Principality of Zeon, One Skiure was deployed in the defense of Granada. At least one Skiure would survive the war, and was in the possession of the crew of the Garencieres in U.C. 0096. It was deployed during a rescue operation against the Garuda. Because the Garencieres lacked any mounted weaponry, the Skiure was positioned in the dorsal hatch to act as a makeshift turret, manned by an AMS-129 Geara Zulu. 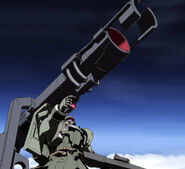 The firepower of the Skiure