Side Story of Gundam Zeta

Side Story of Gundam Zeta

Side Story of Gundam Zeta (サイドストーリーオブガンダムZ)

1
Side Story of Gundam Zeta (サイドストーリーオブガンダムZ) is a manga written and illustrated by Kazuhisa Kondo and publisher Kodansha, released in the B-Club magazine in 1987. An alternate retelling of the events from the original Zeta Gundam series.

After the end of the One Year War, Char Aznable was forced to join the Titans under the pseudonym "Quattro Bajeena" after his sister, Sayla Mass, was taken hostage. He was tasked with locating and destroying the Zeon remnants organization AEUG, which was said to have former White Base crew members among its rank.

In satellite orbit, on an AEUG transport, several AEUG pilots discuss their plan with Petty Officer 2nd Class Kamille Bidan. They would descend onto Earth first to act as a distraction while Kamille and two others proceed with their plan.

Char arrived at Cheyanne, North America, to talk with Amuro Ray, who was under house arrest. Char revealed that what the Titans feared was the possibility that AEUG may have access to the RX-78-2 Gundam's data. After Amuro escaped in the Core Fighter at A Baoa Qu, Zeon recovered the Gundam's remains and brought it back to Granada to extract its combat data. However, that data was lost during the post-war chaos.

Bask Om was informed that a Federation supply base was under attack by multiple AEUG mobile suits. In the meantime, Kamille, piloting an Asshimar, entered the atmosphere with two other AEUG mobile suits just as their transport came under attack by Titans forces. After being informed of the sinking of the transport, Bask Om deduced that AEUG's true goal was Amuro's home in Cheyanne.

Char revealed that AEUG was secretly developing a new Gundam in what they called the "Z Project", and told Amuro about the rumor that AEUG had former White Base crewmembers. Amuro was angered that that was the reason Char came looking for him, accusing him of having become Titans' dog, asking him what would Sayla think if she saw him like that. However, from Char's reaction, he realized that Sayla was imprisoned by Titans, just like him.

Just as Char departed, he saw the AEUG mobile suits - an Asshimar and two Hi-Zacks - heading for Amuro's house. Unable to stop the mobile suits in his unarmed plane, Char headed for the nearest Federation base.

The Federation troops guarding Amuro were only armed with middle mobile suits and infantry weapons, and were easily wiped out by the AEUG mobile suits. Kamille called out to Amuro, revealing that they intended to free him and have him join AEUG. After most Federation soldiers were killed, Amuro punched out the last remaining one and joined Kamille.

Char saw a Garuda - the Sudori - approaching, commanded by Jerid Messa. After entering the Garuda, Char and Jerid boarded two RX-178R Gundam Mk-IIIs and headed for the AEUG team that attacked the supply base, which had retreated to rendezvous with the main team. They easily destroyed the AEUG mobile suits, but were unable to stop Amuro from being taken away.

In the Asshimar, Kamille revealed that he planned to take Amuro to Hickory, where a space shuttle would take them to space. However, Amuro refused, much to Kamille's shock, saying that he no longer wanted anything to do with either the Federation or Zeon. He then asked why Kamille joined AEUG at such a young age, to which Kamille replied that his parents were killed in the hunt for Zeon remnants simply for being citizens of Side 3. He stated that Titans did not care between the difference between civilians and soldiers, leaving them either two choices, fight or die.

Kamille and Amuro arrived at Hickory, and were welcomed by AEUG member Cheif Petty Officer Clamp. As the shuttle prepared for launch faster than scheduled, Kamille was angered by how they were leaving behind the decoy team, but Clamp convinced him that sending Amuro to space safely was their top priority, and that soldiers must follow orders.

Meanwhile, at Granada, AEUG was testing their latest mobile suit, the Z Gustav. As Z Gustav returned to the dock, several Rick Dias and a massive mobile armor resembling the Big Zam were shown. 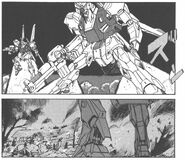 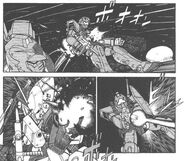