Shu Yashima (シュウ・ヤシマ, Shu Yashima?) is character that appears in the Mobile Suit Gundam: The Origin manga and its OVA adaptation. The father of Mirai Yashima, he led the Yashima Group, owners of the Texas colony in Side 5.

After an attack on Don Teabolo Mass's residence in which Éduoard Mass and Sayla Mass were the targets. Yashima approached the wounded Teabolo Mass and comes up with a plan to move them to the Texas colony in Side 5 managed by Roger Aznable as this would pragmatically make him safer from attack by the Zabis as they would not view him as a threat if he lived so close to Side 3.[1] 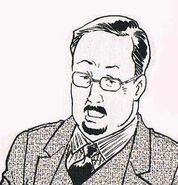 Shu Yashima speaks with Teabolo Mass.
Add a photo to this gallery

Retrieved from "https://gundam.fandom.com/wiki/Shu_Yashima?oldid=436441"
Community content is available under CC-BY-SA unless otherwise noted.