Shirin Bakhtiar (シーリン・バフティヤール, Shīrin Bafutiyāru?) (شیرین بختیار Shirin Bakhtiar) is a fictional character in Mobile Suit Gundam 00. Shirin is the political adviser and coordinator to Princess Marina Ismail of Azadistan. After the formation of the Earth Sphere Federation, she left Marina's side to find a way to help her country. In Season 2, she became a member of Katharon. At the end of Season 2, after the abolishment of A-Laws, she joins the Parliament of the new government.

Shirin has a strong, firm and assertive personality. She has the determination and strength that Princess Marina lacks; influencing and complimenting her in a positive way. Shirin does not doubt to scold Marina when she acts hesitant respecting Azadistan's situation. She is a political reformist; and she supports all the changes concerning the modernization of Azadistan.

Shirin is cunning and skillful in politics, showing an insight much greater than Marina's. She is skilled not only in internal affairs but also in foreign politics, as well.

While looking for ways to negotiate the energy supply of the AEU's elevator, Shirin and Marina discussed about Celestial Being's tactics for eradicating warfare. Whereas Marina saw only manipulation and destruction at the beginning, Shirin was able to see the larger picture.

When Rasa Massoud Rachmadi, the local religious leader who was keeping the conservatives in check, was kidnapped, Azadistan erupted into civil war, with everyone blaming everyone for his kidnapping. Along with Marina she was impotent in this situation and she had to rely on Celestial Being's intervention.

Azadistan's condition worsens as the Earth Sphere Federation has abandoned all aid to their country and left them to rot. Shirin felt her position in Azadistan won't help Marina nor her country, she decides to leave Marina to find alternative methods to save her country. She eventually joined Katharon as one of their senior officers, coordinating information and operations to oppose the Federation.

Space colony Proud is using captured Katharon members has slave labor in their mining facilities. Shirin and Klaus Grad has been coordinating a rescue mission to save their brothers, but their plan was discovered early into the operation. Shirin was concerned that this mission is doomed, but Klaus had her accelerate their plans in an attempt to beat them to the clock. Her concerns were validated when A-Laws attacked and beaten their forces badly during the operation; she and Klaus was surprised to hear that a Gundam appeared and defeated A-Laws, helping surviving Katharon members escape to safety. Shirin fears an armed intervention

Gene 1, Neil Dylandy/Lockon Stratos, had sent vital information that Celestial Being is about to attack the Federation Anti-Government Detention Facility to spring one of their comrades. Shirin and the rest of the Katharon members took advantage of this information to coordinate a secondary assault while CB is distracting their MS forces. Katharon members coordinated an infiltration strike team to free their members and escape by boats waiting at the cliff side. After a successful rescue, Klaus informs Shirin that during their rescue operation, members noticed Marina Ismail in the facility and failed to rescue her; Marina was rescued by Celestial Being and she suspects it was the Gundam pilot they encountered 4 years ago, Setsuna F. Seiei. Though relieved of her safety, Shirin knows that Marina is still in danger as she is a Federation target of interest.

With the sudden annihilation of the Suille Kingdom capital, the top Katharon members were discussing how to destroy the monstrous superweapon, Memento Mori. They decided to dedicate their entire fleet to destroying it. This operation wasn't a failure (due in part to CB's assistance), but they suffered heavy casualties.

Shirin along with Katharon's leaders decided to support the ESF Coup d'état Faction by sending troops to the AEU orbital elevator in Africa. The blast from Memento Mori caused the outer wall components of the elevator to auto-purge. Katharon's troops teamed up with Celestial Being Meisters and other mobile suit pilots(including A-Laws, ESF-Army, and Coup ESF-Army faction) to destroy the falling debris.

With Celestial Being out of the radars for some time, A-Laws started focusing on the persecution and annihilation of all the rebel forces on Earth's surface. Shirin, Klaus, Marina and the orphan children had to scape to a safe house to keep safe. But they were later discovered by National Security and they merely escaped a near death experience thanks to Klaus' cover fire.

After reuniting with Klaus, Shirin picked up Marina and the children to head into space. The ESF has been highly aggressive in their hunt against anti-federation rebels and have nearly eliminated all of Katharon, except for small groups of resistance. There they would meet up with the remnants of the ESF Coup d'état Faction. While Klause headed out for battle, Shirin remained with Marina's group watching the ensuring battle from afar.

After the defeat of Innovators and the abolishment of A-Laws, peace has returned to the solar system. With A-Laws and various members of the ESF exposed for their actions against humanity, political reform ensued. The ESF elected a new world president; Shirin and the remaining members of Katharon were given amnesty for their crimes against the ESF. As a peace incentive, various members of Katharon were integrated into the new parliament as a sign of faith and gesture for reconciliation for past transgressions. It seems Shirin decided to fight for her causes at the political level, it's unclear will Shirin ever return to Azadistan to assist Marina Ismail in rebuilding. It is also possible that her decision to work within the parliament is to help Marina and save Azadistan.

Marina Ismail
She is the princess and monarch of the country Azadistan. Shirin is her political adviser, confident, and coordinator. She has the determination and strength that Marina lacks at crucial times. Shirin has a close relationship with Marina and therefore does not doubt to scold her when she acts hesitant.

Klaus Grad
He is the commander and the de facto leader of Katharon. He shows great concern and worry towards Shirin and the same is true about her. It's been shown that the both of them share a deep mutual respect for each other and a deep bond through their experiences together. At the end of S2 novelization, it was pointed out that Shirin was pregnant with Klaus's child. 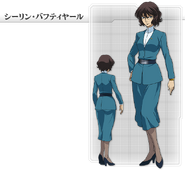