In the land of Peace, where the story of a giant musha of light that saved the land from giant mushas of darkness is told, lives the twin brothers Zero One and Ryuuseiou with their master Kensei. Their peaceful life is broken by an attack by the Maten Ankokutou where Ryuuseiou is captured. Zero One than started on a journey to find his brother. During his journey Zero One, who holds the "Destiny of the Stars (星の宿命)" gathered the seven of the Shichi Tensei. But Ryuuseiou too possess the "Destiny of the Stars" and the Shichi Gekisei of Maten Ankukutou used it to revive Gekisei Ankokushin. Combining with the Tensei Bushin which emerged from the Shichi Tensei, Zero One became Tensei Daishougun and defeated Gekisei Ankokushin, freeing his brother.

Protagonist of the story. The musha with the predestination of the Star of Light (光の星). After their mother died ten years ago Zero One and his brother Ryuuseiou are brought up by Kensei Gundam at Futagodake Village (双子岳村) of western Peace. The brothers studied the Shichisei Tenken Ryuu (七星天剣流) under Kensei. He set off to look for his brother who was captured by the Maten Ankokutou but before that his master gave the Armour of Yuusei (勇星の鎧) and bestowed the title "Musha Gundam" to him. During battle when he call upon the power of the Tensei, the Armour of Kousei (光星の鎧) appear on the Armour of Yuusei. This gives Zero One a power up including flight ability but it has a weakness that the Armour of Kousei has a limit and is not suitable for long battles.
With the presence of the Shichi Tensei and the effect from the "Eclipse of Fate", Zero One transforms to Tensei Shougun Zero One. With the power of the Tensei Bujin, Zero One rise to the next level becoming the Daishougun of the Stars, Tensei Daishougun. Tensei Daishougun possesses seven divine instruments (天星七神器) each displaying the ability of the Shichi Tensei.

Star of Ken (剣の星) of the Shichi Tensei. He is the legitimate successor of the Shichisei Tenken Ryuu, a legendary master swordsman. The Armour of Kouten (煌天の鎧) and the title "Kensei" is handed down generations of legitimate successors. On the night of an eclipse ten years ago, during the war against Maten Ankokutou, a dying mother entrusted the twins of destiny Zero One and Ryuuseiou to him.

Star of Nin (忍の星) of the Shichi Tensei. The leader of a ningun (忍軍) that protects Peace in the shadows, an old friend of Kensei. With instructions from Kensei, Suisei is secretly protecting Zero One who set off to find Ryuuseiou. A silent lone wolf who seldom show himself in public. He is searching for the one responsible for assassinating the previous leader.

Star of Fuu (風の星) of the Shichi Tensei. A hunter from Kokonoe Village (九重村) of the Daihou Highlands (大鵬高地). He mastered the Tenpuujutsu, a technique of controlling wind he possess since young, and on obtaining the treasure of the village he is able to fly freely in the sky. He hunts for the people of the village.

Star of Rai (雷の星) of the Shichi Tensei. A noble spearman living at the Kagami Mountain Pass (鏡山峠) of southern Peace. He is training in seclusion and lives in a small house in the mountains. A polite gentleman. Able to combine with his horse Silver (神竜馬) to achieve the agile Thunder Stallion (雷激閃迅騎) form.

Star of Baku (爆の星) of the Shichi Tensei. Adopted son of the Shikimori Gundam (式守頑駄無), the priest of the Shichiten Shrine (七天神社) at Tokitsu Lake (刻津湖). At first he was seem like a quiet character but actually he can be quite a hot tempered person when he fights. He can combine with his support mecha Koaranbee (魂嵐兵衛) to gain increased mobility. He can also power up to the Assault form (攻爆形態).
In the Bom Bom version, seeing his little stepsister Hiou Gundam (緋桜頑駄無) getting all infatuated with Sourai made Bakunetsu flare up with disapproval. It is also revealed that Bakunetsu is really from a family of martial artistes and was adopted when his family died.

Star of San (山の星) of the Shichi Tensei. Son of the chief of Fujishima Town (藤縞の街), Goushin Gundam (剛心頑駄無). Childhood fiend of Zero One. At one time, when Kensei and the twins stayed in Fujishima, Gouha learnt the basics of Shichisei Tenken Ryuu and trained with the twins. Besides the Shichisei Tenken Ryuu he also uses a self-created set of fist technique. A big-hearted person who does not fuss about small matters. He has an older sister called Karin Gundam (華鈴頑駄無).

The reincaination of the Shichi Tensei in the form of a giant musha. The rebirth of the legendary giant musha of light. The unification of the seven divine instruments that later combined with Zero One forming Tensei Daishougun. Changes to the Rainbow Phoenix (虹星鳳凰).

A legendary warrior who descended from the skies and saved Peace from certain disaster. Referred to the people as "Gundam Zero Shougun", no one knows who he is and what his real name is. Possibly a distant ancestor of Zero One and Ryuuseiou.

Zero One's twin brother. Disciple of Kensei, user of the Shichisei Tenken Ryuu. During an attack by the Maten Ankokutou, he pushed Zero One out of the way and was captured in his place. He was rescued by a mysterious white musha and from him Ryuuseiou obtained the Armour of Kouju (皇珠の鎧). Equipped with the armour he can change to an enhanced melee form. But later he was taken in by the armour and became the Gekisei Shougun.

Gekisei of Ken. Twin brother of Kensei. He was missing after the Shichi Tensei ritual failed on the night of the lunar eclipse twenty years ago. He returned as one of the Shichi Gekisei of the Maten Ankokutou, even so in his heart there is sort of a tragic resolution. Also a user of the Shichisei Tenken Ryuu, the only one who can fight on par with Kensei.

Gekisei of Nin. Masqueraded as the white musha who saved Ryuuseiou and gave him the Armour of Kouju. He then disguised as an old lady, trying to poison Zero One. A despicable character who uses any means to accomplish the objective.

Gekisei of Rai. Gets drunk in broad daylight and rages as he please. Not that reliable a fighter, a rather comical character.

Gekisei of Baku. Usually a quiet person that rather use actions. He displays explosive fighting abilities on the field. He doesn't carry any weapons as he fights purely with his fists.

Gekisei of Ka. He seldom engages in direct combat but with his knowledge he takes the role of a battle strategist back at the base. He plans to revive the Gekisei Ankokushin.

Gekisei of San. A legendary savage that once terrorize the land of Peace, he was then sealed in Tokitsu Lake. Saiko regained freedom when Break and his troops damaged the dam hold back the water of the lake. He seems unable to speak, his enormous physique embody immerse strength and he breathes flames from his mouth.

The Shin SD Tensei Shichinin Shuu series has a line of SD Gunpla kits within the SD Gundam BB Senshi line. Eleven kits (BB Senshi #181-191) were produced and released in 1998. 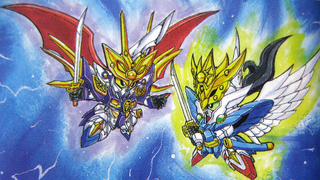 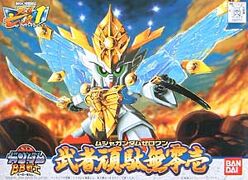 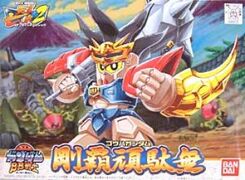 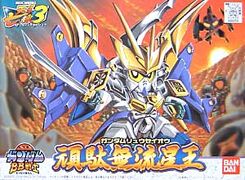 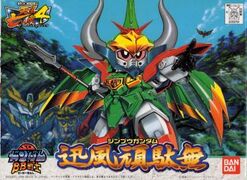 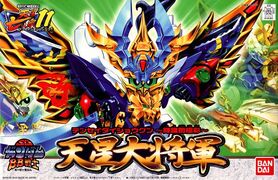 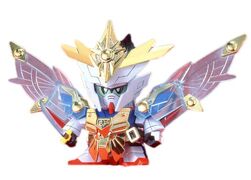 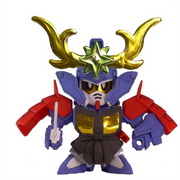 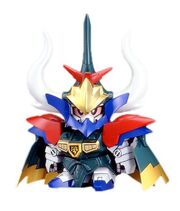 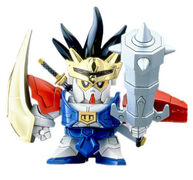 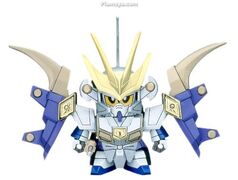 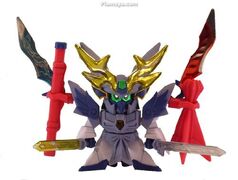 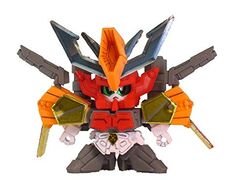 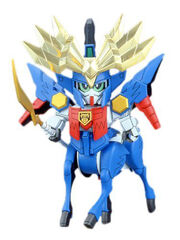 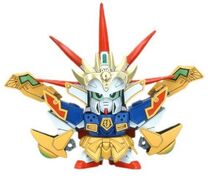 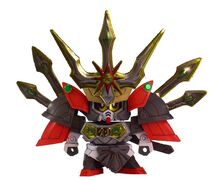 Kensei Gundam
Add a photo to this gallery
Retrieved from "https://gundam.fandom.com/wiki/Shin_SD_Sengokuden_Tensei_Shichinin_Shuu?oldid=442578"
Community content is available under CC-BY-SA unless otherwise noted.