Shin Musha Gundam is a mobile suit which featured in Sony PlayStation's Gundam Musou video game. He is voiced by Ryuzaburo Otomo.

NOTE: These armaments are for the Gundam Fix Figuration Ver. only.

The Tanegashima gun is a special hand carried Ōzutsu Gun that can fire beam shots to the enemy. This is the Musha Gundam's counterpart to the RX-78-2 Gundam's Beam Rifle.

It's default sword weapon, stored in the sheath, the Nichirinmaru is used to cut down enemies in one swing. Unlike beam sabers, it doesn't need high amount of energy to use it.

A Naginata pole weapon, stored on it's back, these are long spears that were wielded in two hands.

A spear weapon, it has a Jumonji Yari style of a head.

A special device that increases the suit's overall performance if it is being operated by a male pilot. 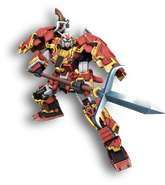 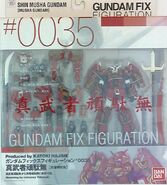