Since there exist many different works detailing Shin Matsunaga's backstory and/or his fate after the One Year War, most of which are contradictory in nature, they are listed here separately.

Born in U.C. 0055, Shin Matsunaga was the eldest son of the Matsunaga family, a prestigious family in Side 3 that was considered equal to the Earth Federation's Yashima family. Shortly before the beginning of the One Year War, he joined the Principality of Zeon military, the only one in his family to do so.[1]

Matsunaga was assigned to the Space Attack Force as a mobile suit pilot, with the rank of Seaman. He piloted an MS-06C Zaku II Early Production Type. During the Battle of Loum, he received a field promotion after his superior officer was killed in action. During the opening stages of the war, he was able to sink one battleship and five cruisers.[1]

In recognition of his achievements, he received a special two rank promotion to Lieutenant Junior Grade. At this point, he switched to an MS-06F Zaku II, which he painted in white and emblazoned with his personal "White Wolf" emblem. His talent as a pilot was noticed by Dozle Zabi, who always had him escort his personal Zaku II during battlefield inspections.[1]

Since he was field promoted, Matsunaga attended military academy for a time after his promotion, as per Zeon regulations. He quickly graduated and was promoted to Lieutenant. It was also at this point that he received his most famous machine, the MS-06R-1A Zaku II High Mobility Type.[1]

Prior to the Battle of Solomon, he was recalled to Side 3. He would remain there until the end of the war.[1]

Shin Matsunaga served as a mobile suit pilot in the Space Attack Force 2nd Space Superiority Division's MS Batallion. During Operation British, he piloted a white-painted MS-06C and defended the colony during the drop, destroying one battleship and three cruisers. He later become MIA during the Battle of Solomon.[2]

Matsunaga was the fifth top ranking Zeon ace during the One Year War, with 141 mobile suit kills and 6 warship kills. His piloted machines were listed as MS-06F and 14JG[3] (though his Zaku High Mobility Type was shown at the beginning of the book).[4]

In Gundam Evolve: 09, there is a character code-named Gray Wolf who pilots a yellow Zeta Gundam. While his name is never specifically stated, his physical appearance matches that of Matsunaga. In addition, he is referred to as a former Zeon ace pilot and a Gray Wolf emblem similar to Matsunaga's White Wolf emblem is located on the Zeta's shield.

The Zeta's yellow color is the result of being covered in the same anti-beam coating as AEUG's Hyaku Shiki. While understanding the value of such a coating, it does not stop Gray Wolf from complaining that he wanted the Zeta to be colored Gray.

Interestingly, Gray Wolf does not seem to have strong Newtype abilities; while the two other pilots are able to sense the approach of a Psycho ship, he is not. During the subsequent battle, Gray Wolf pilots his Buster Zeta into the mobile armor in an attempt to expose the enemy's movement patterns to White Unicorn, another Zeta pilot.

Two other Zetas in the same movie; one is colored in the purple-and-white color scheme of Amuro Ray (and Amuro himself is implied to be the pilot) and the other is painted in the red-and-black colors of Johnny Ridden (though it is a young Newtype girl named Yurii Ajissah who is piloting it). 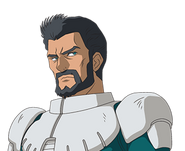 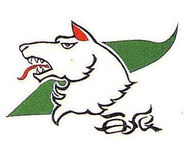 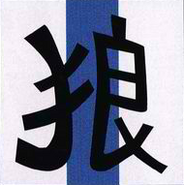 in Gundam Pilot Series of Biographies: The Brave Soldiers in the Sky

Shin Matsunaga as seen on Gundam Pilot Series of Biographies: The Brave Soldiers in the Sky