She seems to have romantic feelings towards Yzak but it is unknown if he feels the same way; if he does, however, he certainly does not make them known. Outwardly, Yzak considers her a loyal soldier and a trustworthy ally. Shiho chooses to wear the standard ZAFT uniform over the women's skirt-style uniform.

Shiho Hahnenfuss wears a red ZAFT uniform, indicating that she is an ace pilot. Before joining the Joule Team she was a member of the ZAFT Ground Corps and, for a short while, the Le Creuset Team.[1] While stationed at Boaz, she spent her time trying to improve the CGUE DEEP Arms's beam cannons, and later receives some help on this matter from Yzak, who has just returned from earth. During the Second Battle of Jachin Due, she fought against EA's female ace pilot "Sakura Burst" Rena Imelia but the fight did not have a conclusive end as she left halfway to destroy the nuclear missiles heading towards PLANT. After the war, Shiho returns to the research lab that she worked at before joining ZAFT. However this is brief and she soon rejoins ZAFT at the army's request, and briefly fought in the independence war of the U.S.S.A. After Yzak returns to the frontlines, Shiho rejoins the Joule squad and pilots a ZGMF-1000/M Blaze ZAKU Warrior. 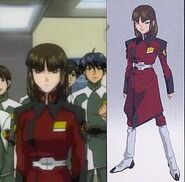 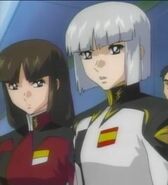 In Gundam SEED Destiny ED - I Wanna Go To A Place

She appears in Gundam SEED Destiny